Amazon today unveiled a plethora of new hardware, including a new entry to its Echo Show lineup of smart displays. The Echo Show 15 is Amazon’s biggest-ever smart display — so big, in fact, that it’s meant to hang on your wall (though you’re still free to make it the centerpiece of a countertop.) Inside the Echo Show 15 is Amazon’s new AZ2 Neural Edge processor, a chip that Amazon boasts has impressive machine learning capabilities. The Echo Show 15 features a 15.6-inch 1080p display that can be mounted on a wall or a countertop in either portrait or landscape orientation. The large screen allows for more content to be shown, so Amazon redesigned the home screen with more customization options and new Alexa experiences. You can customize the home screen to show your shared family calendar, shared to-do lists and reminders, keep track of incoming packages, find meal ideas, see the current weather forecast, leaves notes for others on a sticky pad, and view and control your most-used smart home devices. These Alexa widgets continually refresh with up-to-date content, and you can add, remove, and rearrange them to suit your family’s preferences. When you aren’t interacting with the display, it can show photos or artwork in full-screen, turning the Echo Show 15 into a decoration on your wall.

You can also ask Alexa to play movies and TV shows from a number of supported streaming services, like Amazon’s own Prime Video, Netflix, Hulu, and soon, Sling TV and TikTok. You can also listen or watch news from various mainstream broadcasters, listen to books read from Audible, and more. On the front, the Echo Show 15 has a 5MP camera that you can use to set up visual ID. Visual ID uses facial recognition to distinguish between members of your household. The display can adapt what’s shown on screen based on who walks in front of it, with personalized content like a custom greeting, personal reminders, calendar events, recently played music, or personal notes sent from other members of the household. For kids whose faces have been enrolled in visual ID, only age-appropriate content will be shown to them. The front camera can also be used for video calls or to Drop In on your Alexa contacts.

If you’re worried about privacy, Amazon says that visual ID is optional and any face and voice recording profiles can be deleted at any time. The company also says the product has built-in microphone and camera controls as well as a physical shutter to cover the camera.

At $249.99, the new Echo Show 15 isn’t cheap, but if you’re heavily invested in the Alexa ecosystem and want a large-screen hub for the family, then this product may be worth the price to you. It’s designed to be wall-mounted, but you can purchase a countertop stand or under-cabinet mounting accessory separately. 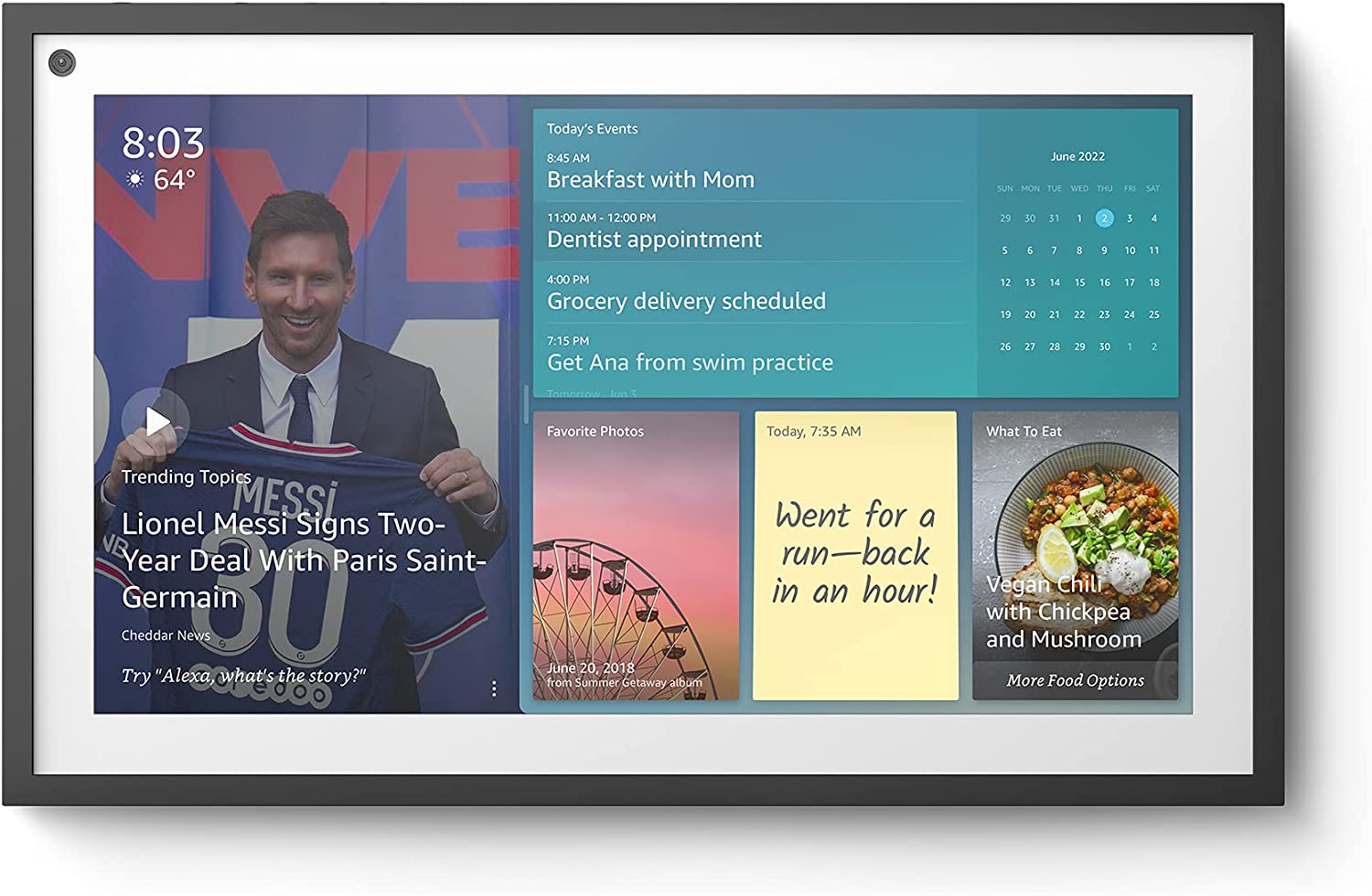 The Echo Show 15 is a giant smart display that hangs on your wall or sits on your countertop. It's the hub for all your Alexa smart devices and a household management tool, as well.

Under-the-hood of the new Echo Show 15 is Amazon’s AZ2 Neural Edge processor. According to the company, this processor has a quad-core scalable architecture and boasts 22 times more TOPS performance than the AZ1. The AZ2 Neural Edge enables on-device speech recognition as well as computer vision workloads in parallel, which is how the Echo Show 15 is able to recognize persons enrolled in visual ID and process their voice quickly and on-device.