When the Pixel 4a 5G was released, customers on Verizon got exclusive dibs on a “Clearly White” version. Everyone else got black. It appears that will soon change, with Google reportedly set to release an unlocked version of the device in the snowy white color.

The good news is the unlocked Pixel 4a 5G in white will be just $499. That’s $100 cheaper than Verizon’s version, which comes equipped with mmWave for the carrier’s ultra-wideband 5G network. That’s a pretty big difference in price, especially if you’re not even in an area that can access Verizon’s 5G network. Verizon’s mmWave network is pretty limited right now, so you might not miss much.

While Google hasn’t made a formal announcement, the search giant told The Verge that the device will be available on January 28. The unlocked Pixel 4a 5G in white will feature the same specs as existing models. That includes a 4.2-inch display, Snapdragon 765G processor, 6GB of RAM, and a 3,800mAh battery. The device also features a dual-camera setup that includes a 12.2MP main lens and 16MP ultrawide lens.

When the Pixel 4a 5G originally launched, some Pixel fans were upset that the device was only available in one color outside of Verizon’s exclusivity. But Google is making amends, making the white version available to everyone who wants it, mint power button and all.

The only disappointing part is seeing the device is arriving in a new color after the holidays, especially when Google previously introduced a blue variant of the Pixel 4a right ahead of the busy holiday season. Whoever picked up the device on sale last month might now be regretting their decision, or at least a little jealous of people who have a choice between the colors. Perhaps the company had an agreement with Verizon, but better late than never. 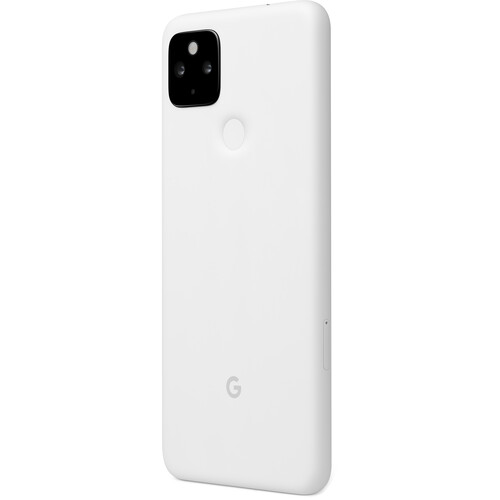 Previously a Verizon Wireless exclusive with an inflated $599 price for mmWave 5G, the Pixel 4a 5G in Clearly White will soon be available through the Google Store, but you can add the device to your wishlist now at B&H Photo Video.