It wouldn’t be an understatement to say that since their entry into India, Chinese brands like Xiaomi have brought the erstwhile comfy players in the industry down to their knees. Chiefly for its predacious pricing, Xiaomi has not only polarized the Indian market by becoming the leader, but it has also given rise to many affordable smartphones with fascinating price-to-specification prospects. Samsung recently realized that, above all, irresistible pricing is vital to woo the Indian consumers, especially those hunting the affordable and budget segments for new smartphones. Following Samsung’s footsteps, LG has launched a new series made in India and limited to the Indian market, with the objective of reviving its sales in the country. The new LG W series consists of three smartphones – the LG W10, LG W30, and the LG W30 Pro – and starts at ₹8,999 (~$130).

The prices for the LG W10 and the LG W30 were announced at the launch event in India today whereas the pricing and the availability of the LG W30 Pro were reserved for a later date. For those of us present at the event, LG allowed us to get our hands on with the LG W10 and the LG W30. The two devices are noticeably different in terms of aesthetics, even though the hardware under the hood is the same. For the ₹1,000 difference, the LG W30 comes with a triple camera setup compared to dual cameras on the LG W10, a swankier gradient design, and more flexibility in terms of the shape of the notch. This also shows that for Indian consumers on a lookout in this price bracket, ₹1,000 can make a huge difference in deciding which smartphone to buy.

The two smartphones, especially the LG W30, come across as decent choices on first look. Here’s how they fared during my brief interaction at the launch.

Starting off with the design of the LG W10, it comes with a reflective unibody shell made out of plastic. The back panel is rounded along the edges which makes the smartphone comfortable to hold. Of the three smartphones in the W series, the LG W10 has the least weight. There are two color options – Tulip Purple and Smokey Grey – to choose from for the back panel. The back of the smartphone houses the fingerprint scanner and an LG logo while the dual camera module is positioned on the top left. On the front, the LG W10 features a 6.19-inch HD+ LCD with a notch that can be called whacky for today’s standards. The notch certainly makes the smartphone appear outdated. The display appears mediocre in terms of color accuracy and saturation. There’s hardly any room for lush expectations from a smartphone at this price, so I wouldn’t complain about the size of the bezels around the display. The wide notch has room for a front-facing flash symmetric to the selfie camera. The power button is placed on the right side of the smartphone while separate buttons for volume up and down are located on the left side of the smartphone. There’s a single speaker at the bottom along with the microUSB port and the 3.5mm headphone jack while there’s a non-hybrid SIM tray on the top. Notably, there’s no secondary microphone to complement the primary one at the bottom.

From the very first gaze, the LG W30 appears much more premium and the first aspect entailing this opinion is the combination of a color gradient and a pattern made with ridges. Over this dual-paradigm pattern is a layer of what appears to be plastic. The LG W30 comes in three different color options including Thunder Purple, Platinum Grey, and Aurora Green. The smartphone is equipped with triple cameras on the back, with a red circle to highlight the primary camera. This dazzling back also houses the fingerprint scanner and has the LG logo near the bottom. The LG W30 uses a 6.26-inch HD+ LCD on the front with a customizable notch overlay. The pixels surrounding the U-shaped notch can be turned off to give it a waterdrop or a ‘V’ shaped notch. In addition to these options, the notch can be hidden completely, leaving only the icons in the status bar visible in white over the black background. In spite of the same resolution, the LG W30’s display feels crisper and richer in terms of saturation than that of the LG W10. Plus, the blacks on the display are much deeper than a usual LCD panel, which helps the different notch shapes look realistic and easily concealable. While there’s no LED flash for selfies on this one, there’s a notification LED near the top. Unlike the LG W10, which uses a unibody shell, the LG W30 uses a shiny metal frame wrapped to form the sides of the smartphones. This metal frame houses the volume rocker and the power button on the right side of the smartphone while the left side features a hybrid SIM tray. A mono speaker, the primary microphone, and the microUSB port lie at the bottom while the secondary mic and the 3.5mm headphone jack are located on the top. As mentioned by LG at the launch of the W Series in India, the camera is one of the pillars of the newly introduced lineup. The LG W10 gets a dual camera setup with a 13MP primary sensor and a 5MP depth sensor. On the front, there’s an 8MP sensor. The LG W30, on the other hand, features a triple camera which includes the 12MP Sony IMX486 as the primary sensor, a 13MP wide-angle sensor with a 100º field of view, and a 2MP depth sensor.  The Sony sensor is also seen on other popular smartphones including the Xiaomi Mi A2 (Mi 6X), Xiaomi Redmi 6 and 6 Pro, ASUS ZenFone Max Pro M2, Xiaomi Redmi Y2, and even the best-seller Xiaomi Redmi Note 5 Pro (Redmi Note 5 outside India). We’ve known this sensor to produce some acceptable images – if not necessarily stunning. On the front of the LG W30, there’s a 16MP shooter for selfies. The camera UI is not the most intuitive one that we’ve come across on smartphones, but you should find your way around with the different modes in the camera as you come to use it. The camera gets so-called AI boosting features for improved color reproduction, beautification, and bokeh shots.

I was restricted to indoors with the smartphone so I didn’t have the opportunity to take enough images to make a fair judgment about the quality of the images. While I’m not setting the expectation bar high, considering the price of the two smartphones, the smartphones should satisfy basic photography needs, although we’d have a more solid opinion only after a full review. 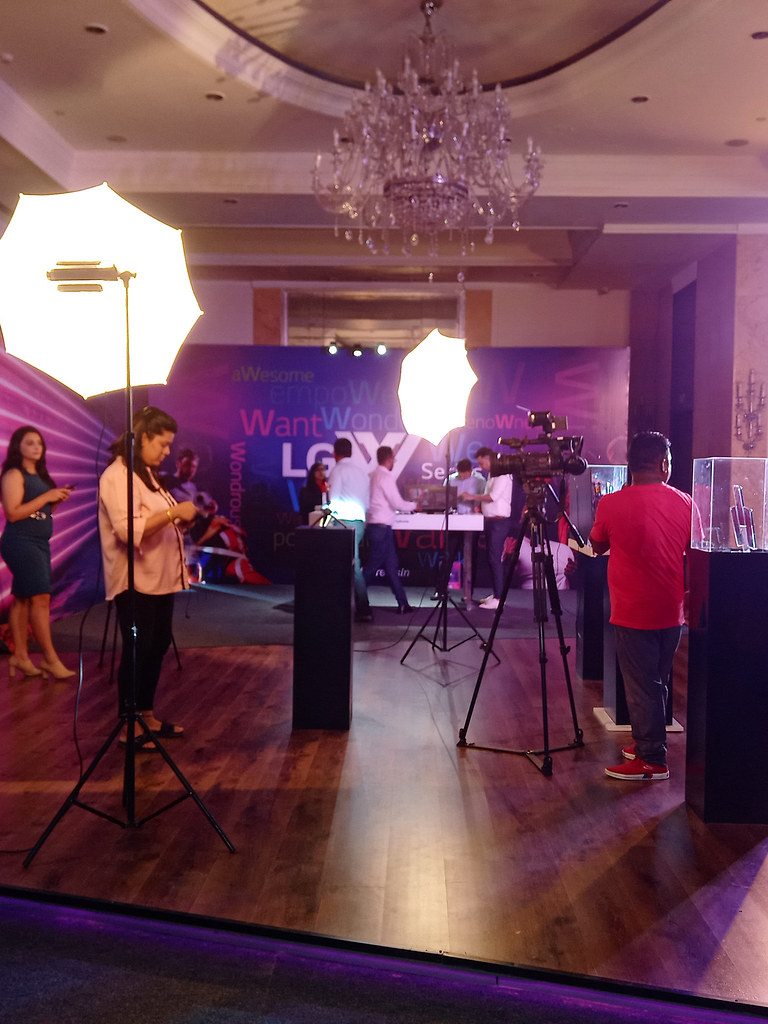 In short, the prospect of triple cameras under ₹10,000 should lure many users but we just cannot be sure if the smartphones deliver on the promise made by the company.

For a long power backup, the smartphones are equipped with 4,000mAh batteries. LG did not note any support for fast charging at the event, nor is there mention on the official product listings. So, it’s safe to assume that the devices lack support for any such feature.

While the RAM and storage offerings are standard for this price, the processor may baffle users looking to game on these devices. LG did not take the chance of claiming these to be gaming-friendly devices, and we can presume that running commonplace apps is what the smartphones should accomplish.

LG has consciously chosen to ship near-stock Android builds on these two smartphones to offer a clean and bloat-free experience. During the event, the company also took a jab at Xiaomi, saying that their UI is free of ads of any form.

The smartphones run Android 9 Pie out-of-the-box and LG has promised to send out security updates on a routine basis. The company, however, did not talk about an update to Android Q so we foresee some waiting involved in it. Given LG’s poor track record with major platform updates, I wouldn’t hold my breath. Nonetheless, Android Pie should keep entry-level users appeased.

LG claims that the new W Series is for the winner in you. This might seem like an overstatement but the smartphones definitely have some weight in them. This especially applies to the LG W30, which comes forward as a more compelling and feature-rich choice among the two. Whether the smartphones actually help float LG’s sinking boat against heavyweights like Xiaomi’s Redmi 7 and the Redmi Note 7 devices is something we’ll come to see when the two smartphones go on sale on July 3rd. While the LG W10 is priced at ₹8,999 (~$130), the LG W30 will come for ₹9,999 (~$145). The leader in the series – the LG W30 Pro – is expected to arrive later next month with Amazon India’s Prime Day sale starting on July 15th. The smartphone is powered by a Qualcomm Snapdragon 632 and, if priced correctly, it may be able to disrupt Xiaomi’s domination as well as Samsung’s popularity.

While LG’s popularity is certainly expected to play a role, the LG W series may not be as successful as it would have been had LG launched it through offline channels as well. I say this because the average online buyer is looking for more value from products than those buying offline. The dynamic is slowly changing with the growth of e-commerce adoption and the last mile reach in smaller cities and towns of India, but we still expect users to be inclined in the favor of Xiaomi devices.

Nonetheless, more competition in the market is always fruitful for consumers and might result in more aggressive pricing from brands holding strong positions in the Indian smartphone industry.