The Moto G series was launched back in 2013 and six years in, the series is now entering its 8th generation. The original Moto G was avant-garde in the realm of affordable smartphones, but the last few generations of Moto G phones have failed to live up to that prestige. The newly launched Moto G8 Plus is here to remind us that the company still knows the craft of building great phones with competitive hardware and aggressive pricing. Succeeding the Moto G7 Plus that launched in February of this year, the Moto G8 Plus brings refreshed internals, three cameras, stereo speakers, and a sizeable battery. I’ve been using the device for the past two days and here are my first impressions.

Note: The Moto G8 Plus review unit was loaned to us by Motorola India.

The Moto G8 Plus is a departure from its predecessor in terms of design and it looks more like an offshoot of the Moto One series with its minimalist aesthetics and familiar camera setup. Motorola briefly experimented with hole-punch design on the Moto One Vision and Moto One Action, but on the Moto G8 Plus the company is sticking to the less obnoxious waterdrop notch. The back is made out of plastic — although its glossiness may fool you to mistake it for glass. As for someone with sweaty hands, the back was covered with fingerprints and smudges in no time, but thankfully there’s a clear case included in the box that should help out as basic defense against scratches and smudges. The back is curved on its sides and provides a nice, snug grip and despite the glossy finish, the device doesn’t feel slippery The Moto G8 Plus comes in two colors: Cosmic Blue and Crystal Pink. Our unit is the Cosmic Blue which features a pleasing gradient hue that turns from dark Navy Blue to Space Blue when you see it from different angles under direct light. As it’s the tradition with Moto devices, there’s also a water repellent coating on board to protect the device against accidental liquid spills and water splashes — but don’t go swimming with it or dunk it in a fish tank as it’s not waterproof!

On the display front, we’re not seeing much difference from the previous generation. The Moto G8 Plus has a slightly bigger 6.3-inch IPS LCD with the same Full HD+ 2280×1080 resolution. The display is set to Saturated mode by default which provides punchy colors but you can switch to Boosted or Standard mode if you prefer accuracy over vividness. The max brightness is good enough when using the device outdoors on bright sunny days. However, just like the Moto One Action, the minimum brightness level is too harsh for comfortable late-night reading. I’m not sure if this is a limitation of AOSP or just Motorola setting the minimum brightness level too high. I used an app called Dimly to get around this issue which lets you lower the brightness level beyond the default lowest setting by putting an overlay. The Moto G8 Plus is very clean looking. On the front, the company has removed the Motorola branding from the bottom chin which was there on the Moto G7 Plus. The only bit that gives away Motorola’s association with the device is the Moto batwing logo on the back which is nestled inside the fingerprint reader. The top left corner harbors the rear camera system which is akin to the one on the Moto One Macro. The Action camera — borrowed from the Moto One Action — takes the prominent position while the 48MP primary sensor, 5MP depth sensor, laser autofocus module, and an LED flash are housed in a vertical strip just beneath it. On the right side are the physical buttons while the hybrid SIM tray can be found on the left. Buttons are easy to reach and provide good tactile response; the power button is textured to tell it apart from the volume keys. Motorola isn’t taking away the convenience of wired audio yet so you still get a 3.5mm audio jack which is located up top beside the secondary microphone. On the bottom, we find the primary speaker, USB-C port and the microphone. Overall, I like the simplicity of the Moto G8 Plus. It’s not very flashy and funky but still manages to look aesthetically pleasing.

The Moto G8 Plus is powered by the Qualcomm Snapdragon 665 SoC, paired with 4GB of RAM and 64GB of storage. While not the most powerful chipset in this price segment, the Snapdragon 665 is a capable driver and can be found inside the likes of the Redmi Note 8 and Realme 5. During my limited usage, the device felt extremely quick and snappy — just like you would expect from any other brand new device in this price range. It’s tough to gauge the full performance potential of a smartphone in such a short period, so this is something that we will touch upon at greater length in our future analysis.

It’s a shame the Moto G8 Plus is shipping with the same version of Android as its predecessor — Android 9.0 Pie. The company hasn’t commented on when it plans to update the device to Android 10 but given the company’s recent track record with software updates, we’re not expecting anything anytime soon. We are open to being pleasantly surprised though.

Some small changes aside, the overall software experience on the Moto G8 Plus is no different than the one on Motorola’s Android One-powered devices. You’re looking at a pure vanilla Android with Motorola’s touch of useful customizations, and unlike several other OEMs that release products in this price range, there is very little bloatware and no system-level ads. The Moto G8 Plus offers additional Moto Actions which are missing from the Android One experience. This includes the screenshot editor feature to edit, crop, and share screenshots on the go; Flip for DND to silence an incoming call by turning the device face down, and Pick up to silence action that mutes the incoming call when you lift the device from the table. Additionally, you can also set the volume up and down key to change tracks when the screen is off/you press and hold the key or you can minimize the screen to the left or right corner with a swipe gesture for better one-handed usage.

The three rear cameras are in charge of the photography department. The 48MP primary camera is a Samsung GM1 sensor that combines 4 pixels into 1 to produce 12MP shots with supposedly increased light sensitivity and details. A couple of shots we took in well-lit scenes showed good detail retention and impressive dynamic range. The autofocus is really quick and accurate, too, thanks to the duo of laser-assisted autofocus and PDAF. You can check out the full images in the Flickr gallery below: 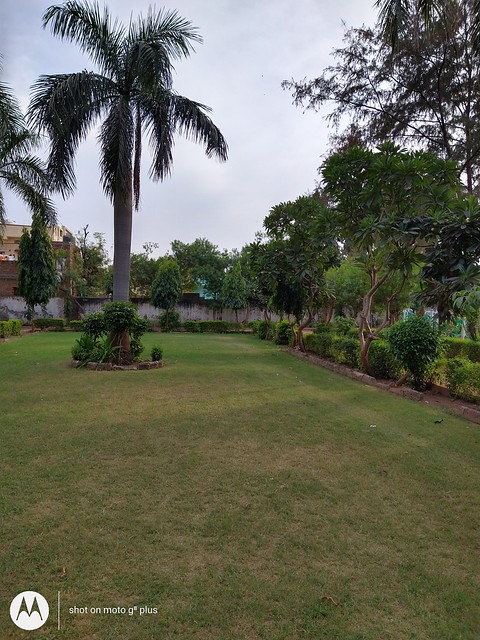 For low-light photography, Motorola is including its Night Vision mode which takes a series of shots with different exposures and stacks them together to produce a final shot that has better highlights and shadow details. The effect isn’t as dramatic as something like Google’s Night Sight but it does make a noticeable difference when shooting in low-light and dark scenes. It’s hard to comment on the low-light performance based on a few samples but for what it’s worth, early results do look convincing for a product in this price range. We’ll be taking an in-depth look at the overall camera performance in a later article. The part that impressed me the most on the Moto G8 Plus is the Dolby tuned stereo speakers. To simply put: it’s mind-blowing. I have yet to come across a phone in this price range that offers such rock-solid sound output. Motorola claims the speakers are twice as loud when compared to a mono speaker on competing devices and while I can’t really test that claim, I can confirm that they are very loud and can easily blow any single bottom-firing speakers out of the water. The stereo setup uses a bottom-mounted speaker and a front-firing speaker, located above the front camera, to create an immersive surround sound experience when watching movies or playing games like PUBG. While listening to my podcasts or watching YouTube videos, I found myself reaching less often for my trusty headphones and opted to route everything through the speakers as they sound captivating. I would even go as far as saying the speakers alone makes the Moto G8 Plus worth buying if you cherish good audio capabilities in this budget.

The supplied 15W charger isn’t the fastest we have seen in this segment but it’s still better than the 5V/2A one we got on the Moto One Action. I only had to charge the device once during this period. It took about one and a half hours for the battery to go from 20% to 100% using the supplied charger.

While the Moto G7 Plus seemed hopeless in the face of fierce competition from Xiaomi and Realme, the Moto G8 Plus goes back to its roots in an attempt to bring back the gusto and vigor that was so peculiarly missing from the previous Moto G generations. To that end, the Moto G8 Plus is a substantial improvement over its predecessor and for the first time in a long while, it feels like the Moto G series isn’t painfully lagging behind the curve. In price-sensitive markets such as India, the Moto G8 Plus will find itself between crushing competition where the likes of Xiaomi, Samsung and Realme have the upper hand. The recently released Redmi Note 8, for example, offers very similar specifications with a better-looking design while still costing ₹3,000 less. The Moto G8 Plus can boast its powerful dual speakers, cleaner software experience and NFC as its advantage but whether these advantages are worth paying the premium is something that is up to consumer preference and priority.

On the other hand, the Moto G8 Plus has a better chance of succeeding in Europe, the UK and the US (if it launches in these regions) where Motorola has historically done better with its Moto G and E series of the lineup and where the price war isn’t on such an insane level.

We should have more thoughts on performance, camera, battery and the overall experience of the device in our future analysis so stay tuned.