Today, Motorola announced the third iteration of its Edge flagship smartphone. The Motorola Edge 2022 comes with a 144Hz OLED display, a MediaTek Dimensity 1050 processor, an improved camera system, and fun new features like improvements to Ready For.

The Lenovo-owned firm launched the device in New York City, shortly before taking journalists to a baseball game at Yankee Stadium. But unlike last year’s Edge launch, the demos weren’t at Yankee Stadium. There were several demo areas. One was for testing the camera, one was for the display and audio, and one was to show off Ready For.

Motorola “Ready For”: Extending your smartphone to a display wirelessly

Ready For actually included two separate demo stations. It’s definitely something that Motorola is putting a lot of effort into, and for a few reasons. First of all, it’s creating a big-screen experience for its smartphones. This can be for gaming, streaming, meetings, and more. The company has created its own custom launchers that are designed around the experience that you want. I’ve participated in a lot of Ready For demos, and I’m always pretty impressed with what Motorola has put together. For example, in the racing game shown above, the Xbox controller is paired wirelessly with the phone, and the phone is paired wirelessly with the TV. It’s sitting on the charging pad, but only because I asked for it to be there in this shot. It was all the way over on the couch before that. Still, there’s minimal latency when playing.

And of course, game streaming has big potential here as well. Indeed, with the ability to play AAA games on your phone with services like Stadia and Xbox Cloud Gaming, being able to put that on the big screen, well, it changes the game. The thing that excited me most about Ready For is how Motorola is finally starting to take advantage of the fact that it’s owned by the largest computer manufacturer in the world, Lenovo. If you look at companies like Apple, Huawei, and Samsung, all of them have worked really hard at their ecosystem, with the understanding that there should be a seamless transition between devices.

Huawei calls this Super Device, and Apple calls it Continuity. It’s this idea that whichever screen you’re looking at – whether it’s a PC, a phone, a smartwatch, a tablet, or anything else – the experience is already tailored to you. The reason Huawei calls it Super Device is because the “device” is the ecosystem.

Motorola and Lenovo aren’t there yet, but they’re working on it. Separate from Ready For, this is Ready For PC. You scan a QR code with the phone, and it instantly connects. One of the things it can do is create a desktop environment from your phone. You can drag and drop files from one to the other, and of course, you can use your phone’s apps. It’s sort of like what Samsung does with DeX, but DeX is more about creating a total desktop environment. Ready For creates a different environment depending on what you’re plugged into.

As I mentioned earlier, I do think that Motorola has a long road ahead of itself here. There’s a ton of potential in creating great experiences when you’re selling the whole stack. I’m not sure how valuable it is to put a phone-based desktop experience on top of an actual desktop experience. It might be better to just have a more simplified way to access the files from your phone.

One of the demo stations was to show off the screen and speakers. In fact, the speakers are Dolby Atmos, so they sound pretty great.

Unfortunately, the room was really loud with the hustle and bustle of a tech media event. The first song on the playlist was a Billie Eilish song, and I really couldn’t hear it very well. I turned to another Billie on the playlist that Motorola provided. I was more impressed with quality than volume, but I don’t think anyone is going to be listening to music in a room that loud without headphones. The screen is everything you would expect from a 144Hz OLED display. It’s beautiful with smooth animations. However, this was one of those demos where there’s just not much to say. It’s like the 5,000mAh battery, which I have no way of testing until I get the device. I can’t really comment on the 144Hz refresh rate until I get a chance to play some games on it. In the meantime, let’s just say it’s pretty.

And then there’s the 50MP camera, which seems solid. This is another area that’s somewhat useless without real-world experience. There’s also a 13MP ultra-wide sensor, and I took exactly one photo with each lens. There really wasn’t much to take pictures of, but they did have a dark area with a ski-ball machine with tricky lighting. 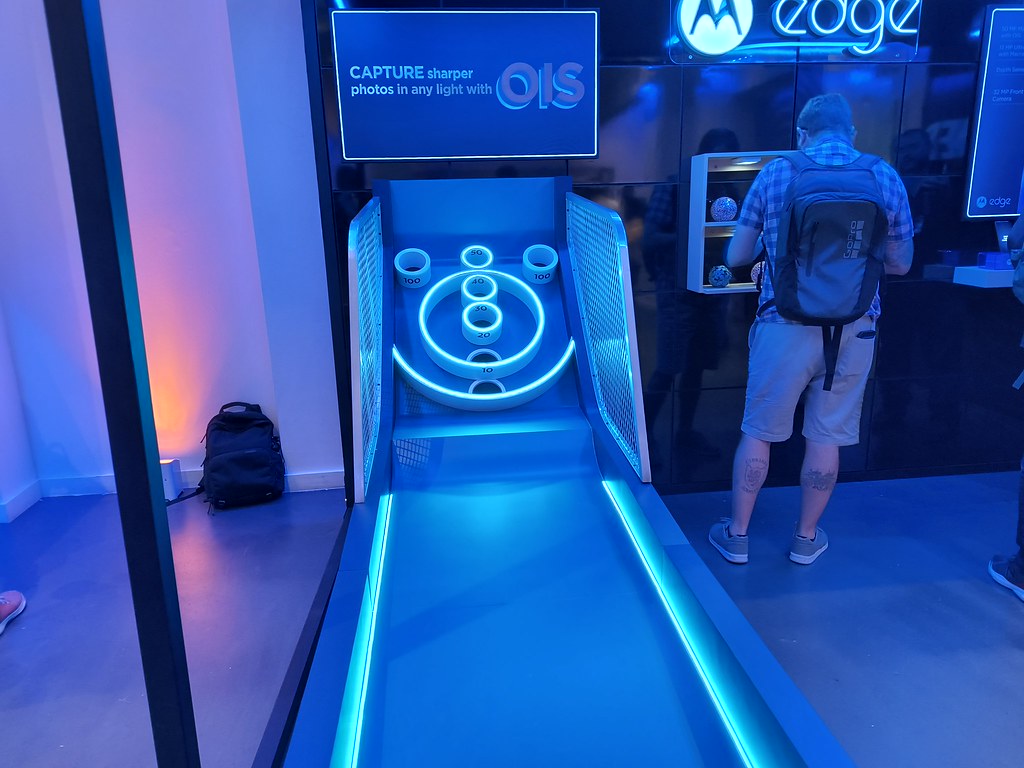 It also supports super slow motion video, which is 720p at 960fps. It’s not a feature that’s new to the market, but it’s always fun to check out. The Skee-Ball machine, oddly, had tennis balls instead of Skee-Balls, so it was impossible to play.

The camera seems fine, especially for a $500 phone. That $300 to $500 price point is really where Motorola is strong. In the premium range with the Edge Plus, Motorola has the same camera woes that OnePlus has, which is that the camera is fine, but fine simply isn’t good enough when you’re competing with the best from Apple, Google, and Samsung.

Other features on the Motorola Edge (2022)

As I said earlier, there’s a 5,000mAh battery under the hood, which Motorola says will provide up to two days of battery life. That’s definitely something to look forward to when we get to spend more time with the device. Another thing to note is that this is the first phone with the Dimensity 1050, MediaTek’s first chipset to support mmWave 5G. That means that in select (very select) areas, you can get super-fast gigabit download speeds on your phone.

The company noted that people are keeping their phones longer, and has committed to three full Android updates, meaning that since the Edge is launching with Android 12, it will eventually see Android 15. It’s also going to get four years of bimonthly security updates.

What are your thoughts on the new Motorola Edge (2022)? Let us know in the comments below!