OnePlus 10T First Impressions: You win some, you lose some

OnePlus has a pretty consistent flagship launch strategy at this point: a flagship launch earlier in the year, followed by another refresh later on in the year. Recently, “T” variants of the company’s phones have downgraded a little bit from their earlier flagship counterparts but bring to the table some interesting improvements, too. The OnePlus 10T follows that pattern, as while it downgrades on some things like the screen and the build, it introduces 150W charging and the Snapdragon 8 Plus Gen 1.

Is the OnePlus 10T worth your money? In my mind, it’s a great device that I love a whole lot more than I thought I would. A huge amount of that comes down to the chipset, but the rest of the phone is outright good as well. There are downgrades that make it a bit odd in comparison to the OnePlus 10 Pro that launched earlier this year, but given that it’s a good bit cheaper, it does make sense.

Fundamentally, the OnePlus 10T is a good phone, and that’s all you need in a phone for it to be usable. While this isn’t our full review (that’ll be coming later), these are our first impressions of the OnePlus 10T after using it for about a week. As it stands, I’m already happy with this phone and I love it, and there isn’t really much for me to complain about at all so far. About this review: I received the OnePlus 10T in Jade Green from OnePlus U.K. on the 26th of July, 2022. While the company provided us with a review unit, it did not have any input into the contents of this article.

The OnePlus 10T is on sale now in the U.S. It’s available in three RAM/storage configurations at the following prices:

The device will be available in two colorways — Moonstone Black and Jade Green. All variants will ship with a 160W charging brick in the box, so you won’t have to purchase one separately. The OnePlus 10T features quite a similar design to the OnePlus 10 Pro, though there are some subtle differences. It’s squared off from the edge to house three cameras and it curves outward to the body of the device rather than cutting off abruptly, however, the camera island curves into the back glass of the phone. It’s a bit like the OPPO Find X3 Pro or the Find X5 Pro in that regard, and I’m sure that’s no coincidence, either. You’ll also notice that the Hasselblad camera etching is missing, though I’m told by OnePlus that’s going to be reserved for the camera flagship phones that the company releases, and not “T” mid-cycle refreshes.

The front of the phone is a little bit different from the last time around, too. It’s a 120Hz AMOLED screen, but the similarities stop there. It’s flat, it’s full HD, and doesn’t have LTPO support. There’s a punch-hole camera just like last time, except this time, it’s centered instead of being off to the left. It still looks good, but the display also noticeably gets nowhere near as bright as the OnePlus 10 Pro. It tops out at 950 nits here, which has been good enough for my usage, generally speaking. The top of the phone has a speaker grille to serve as both an earpiece and a second speaker, though it’s not as loud as the bottom-firing speaker. They sound just as good as the OnePlus 10 Pro, too. The phone is thick and somewhat heavy to hold in hand, though OxygenOS 12.1’s one-handed mode helps out when trying to use the phone with one hand. The back is very much a fingerprint magnet, especially on our Jade Green unit, and there is no case in the box with the OnePlus 10T either (in the US and EU), which is a surprising omission from OnePlus. You get a case in the box in India though.

Haptics-wise, I really enjoy the OnePlus 10T and find that it does a good job. Vibrations are noticeable in your pocket, and it’s not too loud when the phone is on a table and vibrates, either. It’s nice to type on and I know when I get a notification, and that’s the most important thing.

It’s not all good though, and I do have a few complaints. For starters, removing the alert slider seems like a weird move, as it’s something that was iconic to OnePlus and helped the company’s phones stand out with their own identity. I don’t really think it’s the death knell for OnePlus that people seem to think it is, but nevertheless, I find it odd. The other complaint I have is that the frame of the phone is plastic. It’s essentially a OnePlus Nord 2T build and feels quite similar to it as well. I like the phone and it’s a functional design, but there are some definitive downgrades here.

Remember how I mentioned that the OnePlus 10 Pro is the company’s “camera flagship” of the year? Yeah, the OnePlus 10T takes a pretty big downgrade in the camera department. It goes from Sony IMX789 primary sensor to an IMX766, a 50MP Samsung JN1 to an 8MP ultra-wide, and a 2MP macro camera in place of the 3.3x telephoto from last time around. 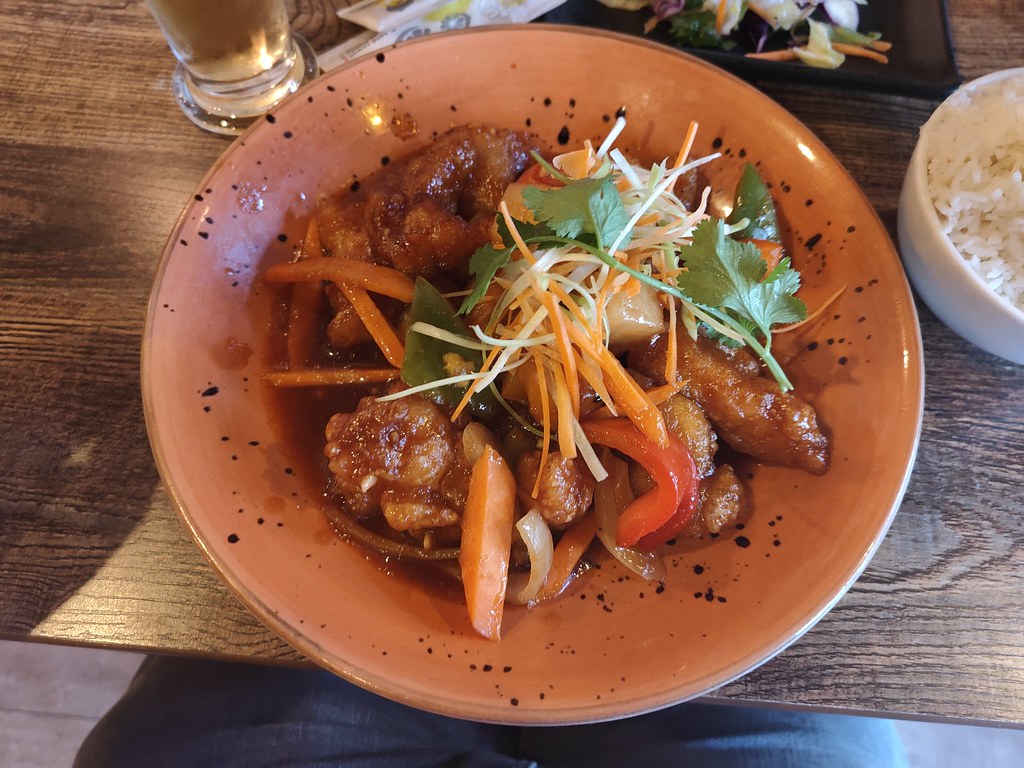 While we’ll reserve judgment for the full review, it’s a noticeable downgrade. If you care about your phone for the camera and really want a OnePlus phone, then you’ll want to look at the OnePlus 10 Pro instead of this. This isn’t the company’s camera flagship, and that’s pretty evident from my testing of it.

The OnePlus 10T may not be the camera flagship of the company’s phones, but OnePlus tells me that it’s the performance flagship. It’s got the best chipset, a ton of RAM, and fast storage which makes this the complete package when it comes to anything intensive. Thanks to the Qualcomm Snapdragon 8 Plus Gen 1, that would definitely be the case. There’s still a toggle in the phone’s battery settings that will enable a high-performance mode (which is off by default), so we’ve run tests with it both on and with it off. I ran CPU Throttling Test and Geekbench 5, and the results are below.

No matter which mode you use, the performance feels basically the same in most tasks. I don’t notice any major difference aside from the phone heating up more when high performance mode is enabled. With the toggle switched off, the throttling test identified a throttle to just 93% of its max performance in a half-hour test, one of the best results I have seen from a flagship chipset in a long time. The difference between when the toggle is on or off is also minimal.

A lot of this is very likely down to the Qualcomm Snapdragon 8 Plus Gen 1, as this phone is very similar to the OnePlus 10 Pro aside from that. Along with those efficiency improvements, we’ve also spotted some clear battery gains in screen on time and overall device usage. The Snapdragon 8 Plus Gen 1 features an improved Qualcomm Kryo CPU, with a Cortex-X2 prime core clocked at 3.2Ghz, three Cortex A710 performance cores clocked at 2.8GHz, and four Cortex A510 efficiency cores clocked at 2.0GHz. Qualcomm claims that the upgraded CPU is 10 percent faster than the one on the Snapdragon 8 Gen 1 and offers 30 percent better CPU power efficiency. We made similar findings in our testing of the Snapdragon 8 Plus Gen 1 reference device Asus previously shared with us. And so far, every device we’ve tested with this chip has been consistent with those findings, like the ROG Phone 6 Pro and the Zenfone 9.

We’ll have a lot more performance testing to share in our full review of the OnePlus 10T.

OnePlus has always been known for super-fast charging, and the OnePlus 10T is no different. The company this time packs in 150W charging in the box, with promises that it can charge your phone from 1% to 100% in just 19 minutes — and we reached that number in just about that time, so their claims are on point. If you live in the U.S. though, it will only be 125W charging. What’s more, the power brick once again supports USB Power Delivery only up to 45W and not 65W or higher, similar to the situation that was with the 80W charger that came with the OnePlus 10 Pro. The OnePlus 10T also lacks wireless charging; it’s not something I care about, but maybe you do.

While also early days, I have had excellent battery life since using this device as my daily driver. Anywhere from five to six hours of screen on time is pretty much par for the course, which is an improvement over the OnePlus 10 Pro.

Of course, we’ll need to see how the phone fares over a longer period of time as a daily driver to confirm that it is as good as it currently looks, but it bodes well to be doing this well already. The super fast charging in tandem with great battery life is something that a lot of people will appreciate. For example, I was going out the other night with some friends and had forgotten to charge my phone before leaving. I was able to charge it up a significant amount with just ten minutes on the charger, something that I haven’t been able to experience since the Xiaomi 11T Pro. Great battery life with fast charging is a fantastic combination.

OnePlus 10T: Should you buy it?

While this isn’t our full review, I feel confident in saying that this is a great OnePlus phone. It’s obviously missing some things like a premium build and an alert slider, but it makes up for that in some regard with much better battery life and performance. You essentially need to weigh this phone up against the OnePlus 10 Pro (or any of the other best Android phones) to find out which you want more, but no matter what, you can’t really go wrong with either.

For what it’s worth, the OnePlus 10 Pro is definitely the better buy overall, but if you really want fast charging and great battery life above all else, then this is the phone to get. We’ll be sure to update with our full review soon, but as it stands, this is a great phone already.

XDA » Mobile » OnePlus 10T First Impressions: You win some, you lose some