Opinion: Why I Grow Less Worried of a Disappointing Nexus

A new Nexus 5 is coming, and what started out as a supposed rumor has seemingly transitioned into an impending reality in the span of just a few months. The “double Nexus” gossip that started back in May seemed so unnatural back then, especially when we first heard Huawei would be one of the designed manufacturers. Now that the idea has settled in the collective Android unconscious, people left behind their fears and are now curious – if not eager – to see what comes next.

But what I want to talk about is the Nexus 5, or “Nexus 5X” as the latest rumors call it. The new LG-made Android poster child sports a new and polarizing design, some neat specifications that many consider outdated, a new port standard, and will come with Android M out of the box. Now, the  comments I see around surrounding this device tend to point out how the specifications may not be up to par, or how the design is ugly. The latter is mostly a matter of opinion, and in some ways, I agree. The Nexus 5 is still one of the sleekest devices out there, and the new revision doesn’t seem as stylish. That being said, I find myself having less and less doubts about the new Nexus 5 as each new leak shows up, because when looking at both Nexus 5 holistically – and going past just specs and price – I see plenty of potential. I hope it comes without the watermark.

Part of it has to do with specifications: the alleged set includes the Snapdragon 808, 3GB of RAM, a 5.2-inch 1080p display, 16 and 32GB of internal storage, and a 2,700mAh battery. Now, there have been numerous leaks detailing the processor, but the battery had remained inconsistent up until this week where a leaked battery filing suggest it is around 2,700mAh indeed. With these specifications in mind, what can we expect from the Nexus 5?

First of all it must be stated that these expectations are based on the assumption that these leaks are correct. Under that presumption, the leaked specs are also looked at holistically. When it comes to performance, the Nexus line has always been at the top of the game in the real world, and it typically packs the best in pure processing numbers as well. The Nexus 6 had an initial slip in real-world UX due to the default encryption at release, but 5.1.1 made the Nexus 6 one of the fastest around due to clever Kernel optimizations. So far, so good, but what about the Nexus 5 in particular?

“Evading the Snapdragon 810 is smart not because the chipset is invariably awful, but because it’s variably good”

I bought the Nexus 5 last year, late to the party, and from the moment I turned it on I could not believe its amazing performance on KitKat. But the moral of the story is not that Nexus phones are typically fast, because we’ve all known that. Rather, that the configuration of the Nexus 5 worked brilliantly to deliver an amazing user experience, and it still does, close to two years after its release.

The Snapdragon 800 was fast then, and it’s fast now. Many companies still opt for the slightly revised Snapdragon 801. The 1080p display of the Nexus 5 also helped, because even the updated 801 had trouble pushing the 1440p screen on the LG G3. If you ask me, the Snapdragon 800 was the chipset that solidified performance on 1080p, just like the 805 did for 1440p. The Nexus 5’s display was great for its price and time, and this press photo doesn’t prove it.

Going back to the new Nexus 5: if the resolution is kept the same, the processor is an upgrade in both CPU and GPU over the Snapdragon 800 (and the 801 too, but not the 805 due to the weaker Adreno 418 GPU), and if Google delivers a more optimized version of Android built with this device as a reference model, like with the old Nexus 5, it’d be a little silly to expect disappointing performance. The Snapdragon 808 doesn’t throttle like the 810 does, and after receiving my OnePlus 2 and beginning in-depth testing, I can fully confirm the Snapdragon 810 is a hot chip and that evading it is a good decision on LG’s part. Not because the chipset is invariably awful, but because it’s variably good, and the lack of consistency in performance is something that a Nexus phone cannot afford. 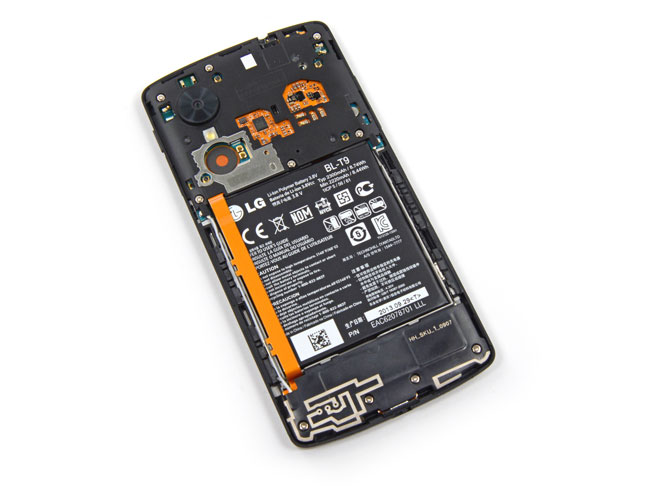 You could have done so much more!

Onto the battery… Now, in 2015, 2,700mAh might sound meek. Like I always say, though, the number itself is meaningless without looking at the rest of the components. The screen itself is allegedly 1080p, which not only is a resolution that brings no more fear of unwanted drainage today, but it’s also a display on an LG phone. The Nexus 5 screen was surprisingly good for the price one had to pay, and LG has made tremendous leaps forward with its display technology in the past two years through POLED and Quantum LCD panels.

A 1440p panel no longer means bad battery drain, not on LG and Samsung phones at least. Samsung’s latest panels, for example, are largely more efficient than their 1080p panels from the Note 3 era.

Then there is the processor. The Snapdragon 808 might not be as efficient as the Exynos 7420, but it certainly proves a better alternative than the 810, and it remains the most efficient choice for a 2015 flagship as well. And if that wasn’t enough, let’s put things into context: the original Nexus 5, with an older processor, operating system and a 2,300 mAh battery, was able to last a day. Not without more merits than that, though, as most of us Nexus 5 owners recall that it was not an endurance champion by any means.

But one should never underestimate the power of optimization, and to be frank, it seems a little nonsensical that we expect battery capacities to get larger just to keep up, when the advancement of circumventing technologies should net you more juice out of your battery, not less. Case in point, the Note5, which I recently reviewed, and its impressive ability to squeeze out a similar battery to the Note 4 and Note 3, with ~10% less capacity and a higher-resolution screen. My tests led me to the inescapable conclusion that Samsung’s components largely improved in terms of efficiency, allowing the company to slash 300mAh without many inconveniences

The final reason as to why I am not too worried about the Nexus 5 is software. Now, I know better than to trust Google with a smooth Android version transition after Lollipop. But at the same time, I know that Android M could be potentially huge for them. This part is more of a speculative hunch, yes, but I have many reasons to believe that both of the Nexus phones and Android M could make a terrific combo that would net Google an impressive head start opportunity on their new round of services and the framework and foundations for more to come.

What’s more suitable for pushing affordability than a refreshed Nexus 5?

And even if the new Nexus is packing a Snapdragon 808, a 2,700mAh battery and a 1080p display, it most likely will be a good deal, because I suspect Google is aiming for an affordable release for this one like they did with the original Nexus 5, and that’s a good thing. The Nexus 5 is one of the first few phones that actually began the “affordable flagship” trend and what’s more suitable for pushing affordability than a refreshed Nexus 5? We must also keep in mind that the global smartphone market has changed since then, and now it’s not rare for a device to carry flagship specifications at around the same price the Nexus 5 did then.

For these reasons, I don’t fear that the Nexus 5 will miss the mark in terms of offering a compelling package. I don’t expect it to be awesome either, mind you. Grounding expectations goes both ways, and while I appreciate what the Nexus 5 did more and more as time goes by, I still want to wait and see before I can claim that these suspicions are or were true. Until then, I’ll just keep waiting for The Next Nexus, Once I give it a thorough and objective look, I’ll know for sure, and I will report back and detail my findings. If it does perform badly, you better expect me to detail why that is, just as I did in my recent Note5 review. As much as I love the Nexus 5, I won’t hold back if it disappoints!

What are your expectations for the upcoming Nexus 5? Sound off below!

XDA » Featured » Opinion: Why I Grow Less Worried of a Disappointing Nexus