Mid-range phones are getting cheap, and cheap phones are getting good. This is a trend that has taken a few years to really set in, yet it is becoming truer every year. The Redmi Note 9T is one of Xiaomi’s latest mid-range smartphones to release outside of China (where it’s known as the Redmi Note 9 5G). Powered by the MediaTek Dimensity 800U, the Redmi Note 9T is one of the phones I was most excited to get my hands on. For years, MediaTek has generally been known to offer lower-tier chipsets compared to its competitor Qualcomm. In fact, for a long time, MediaTek did not make any high-end chipsets. MediaTek’s Dimensity line of chipsets has really turned things around, though, and I’m very impressed by its performance on the Redmi Note 9T, among other things. About this review: Xiaomi loaned me a Redmi Note 9T global unit but did not have any input regarding the content of this review. The Redmi Note 9T’s design is pretty unique, though it borrows some elements from the POCO X3 NFC. The back camera takes the shape of a circle with the top and bottom cut off, where the three back cameras and the flashlight reside. The back is hard, textured plastic, with the Redmi logo and regulatory information at the bottom. It’s not the most premium design, but it’s practical, functional, and sturdy. There’s also a clear gel case in the box, which offers extra protection for your new device and raised edges above the screen, along with a pre-applied screen protector.

The all-screen front is impeded only by a small chin and a hole-punch cutout for the selfie camera in the top left. The Redmi Note 9T has a Full HD+ resolution IPS LCD panel that refreshes at 60Hz and reaches brightness levels that are perfectly adequate for outdoor viewing. It’s not the best display, but it’s good quality for the price and serviceable for browsing the web, watching YouTube videos, and other general media consumption. There’s nothing that stands out about the Redmi Note 9T in terms of design, but at its price point, there doesn’t need to be. It has a pair of stereo speakers (though the bottom-firing one is a lot louder) and a 3.5mm headphone jack on the top. Finally, the Redmi Note 9T also has an IR Blaster that can be used for controlling infrared devices nearby from the Mi Remote app. The speakers are perfectly apt to listen to music or watch videos, though don’t expect premium audio performance. The microphone is good too, and I could be heard and understood clearly enough on phone calls.

The buttons on the side are clicky and functional, though they’re not the highest quality. The power button also doubles up as a fingerprint sensor, which feels slightly cheap but is completely functional and quick to unlock. Left-handed users beware: The power button/fingerprint scanner sits on the right side of the Redmi Note 9T, so you’ll either need to unlock it with your right hand or wrap your left hand around to reach it.

The camera quality of Xiaomi’s Redmi Note 9T actually impressed me, especially since I didn’t expect much from a budget device. Generally speaking, budget devices tend to cut corners when it comes to the camera in ways that it’s almost not worth using in certain situations. I didn’t really have that experience with the Redmi Note 9T, though, as I found the camera apt for many situations. As cheaper smartphones get good, including their cameras, we’re starting to see good cameras trickle down to even the cheapest of smartphones.

It’s a long way off from a genuine flagship competitor, though. Still, I feel confident in saying that most people will be happy with the Redmi Note 9T’s camera quality from both the selfie camera and the primary rear-facing camera. The images below are compressed and resized thanks to WordPress, but they give you an idea of the overall camera quality and dynamic range. The Redmi Note 9T is a great example of how budget smartphones are getting better and better cameras. There’s no real shutter lag, either; this device is just point and shoot without any major lag or delay to note when taking photos. If you’re looking for a smartphone with a great camera and nothing more, there are certainly better options if you can spend a little more, such as the Google Pixel 4a. However, you won’t be disappointed by the Redmi Note 9T if you’re on a budget and only need to take the occasional photo.

A quick tip: Make sure to switch off the watermark in your camera settings. I left it on just for the photos above, but you can switch it off in the camera settings. If you want to leave it on for some reason, you can add a time-stamp and your own text beside the device name.

This is one of the most interesting aspects of the Redmi Note 9T, primarily thanks to the MediaTek Dimensity 800U onboard. I didn’t really know what to expect as I’ve never used a Dimensity-powered smartphone before. I obviously wasn’t expecting a revolutionary smartphone experience, but what I did get was rather impressive for the price. I could play PUBG Mobile at HD quality, generally between 30 and 60 FPS at all times. There were occasional dips, but none that lasted too long or made the game unplayable, and you can drop the quality if you want to squeeze more FPS out.

When it comes to performance, the Redmi Note 9T isn’t the best — nowhere near it, in fact, as shown by its Geekbench score. These scores come very close to the scores produced by the Snapdragon 732G which powers devices like the POCO X3 NFC. I also ran a CPU throttling test, which showed fully sustained performance when pushed to the limit for just over 5 minutes. Past that, it throttled to around 78% of its maximum performance — not great, but not terrible, either.

This is decidedly a mid-range budget smartphone, but ultimately my experiences have shown that the Redmi Note 9T is a solid and competitive mid-range device. If you’re looking to pick up a smartphone to emulate devices more powerful than a Nintendo DS, then forget about it. The MediaTek Dimensity 800U is not made for that. If you’re looking to pick up a smartphone for basic gaming, general web browsing, social media usage, and watching TV shows or movies, then you can’t go wrong here.

If I’m honest, MIUI 12 is one of my favorite variants of Android. MIUI is incredibly smooth and packed full of genuinely useful features. While MIUI had a bad reputation a few years ago, I find that it now looks good and performs well. It also enables the Redmi Note 9T to have fantastic battery life, and it took me through the day easily with 5-7 hours of screen on time every day. I tend to use my phone a lot when I’m at home, though I’m also aware that being on Wi-Fi is a lot less taxing than being on mobile data when moving about throughout the day. As a result, these results aren’t the most accurate, but I’m confident in saying that the Redmi Note 9T’s 5,000 mAh battery coupled with a budget-oriented chipset has no trouble getting through the day no matter what you throw at it.

Although MIUI is as fast as ever, there is sadly still a lot of pre-installed bloatware. Facebook, TikTok, WPS Office, and Agoda all came pre-installed. Six games are also preinstalled: Block Puzzle Guardian, Crazy Juicer, Dust Settle, Tile Fun, Bubble Story, and Bubble Shooter with Friends. All pre-installed apps and games can be removed, fortunately, though it’s annoying to have to remove all of them.

Overall, this is the same MIUI you’ve come to expect in recent times, but with a few new additions. The MIUI launcher now has an app drawer, so you don’t need to install a third-party launcher for an app drawer if you want one! Still, I recommend you check out a third-party launcher to tinker with your new smartphone. I set up Niagara Launcher on my Redmi Note 9T, for example, which recently came out of beta! In any case, if you didn’t like MIUI a few months ago, you wouldn’t like it now. Though if you liked it before, you’ll definitely like it now.

Having said that, there are still a few software quirks here and there that have bothered me. For example, I discovered that a blue light filter was enabled at all times at night and was unable to be switched off. This appears to have happened because I restored a Google backup when I set the phone up, as I found that it was the AOSP blue light filter that was enabling at night automatically. In case anyone else runs into a similar issue on their unit, it’s quite easy to fix using ADB. You need to run two commands after enabling “USB debugging” and “USB debugging (security settings)” in developer options.

Once I ran both of those commands, the problem went away, and MIUI’s blue light filter (dubbed “reading mode”) works fine now. I don’t understand why these values were not reset when I restored my backup, considering that you cannot enable or disable these through normal means.

Another issue I had with MIUI was that it required me to disable dark mode individually for every app. Enabling dark mode enables dark mode individually for apps that may not necessarily support it, as a workaround for apps that don’t actually have a dark mode. This can change an app’s colors and make apps look ugly, but you’ll need to turn it off individually for each app that you don’t like the look of. It’s fine for most apps, but I ran into a couple I had to switch it off for. The biggest offenders were Spotify and Facebook Messenger, where UI elements clashed, and white text was hard to read against a light gray background. It’s a useful feature for apps that don’t have a built-in dark mode, but it’s not perfect.

The Redmi Note 9T is a fantastic budget smartphone with a powerful (for the price) chipset. It’ll satisfy the needs of the average user interested only in using their phone to watch movies, browse social media, capture a few photos, and play a few games, all on a single day’s charge. The battery life is great, the device feels good in the hand, and the display is also more than adequate at this price point. Overall, I don’t really have any complaints about the Redmi Note 9T that won’t seem like nitpicking given its price, and the biggest issues that I do have are all fixable in software. 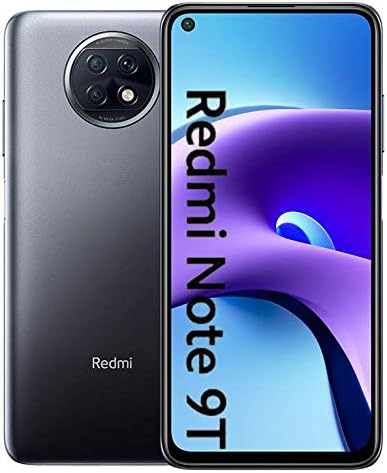 At a starting price of £229/€229, there's little room for complaints about Xiaomi's Redmi Note 9T. In fact, I like almost everything about it considering its price.