When it comes to Android tablets, Samsung is one of the few OEMs still making products that can attempt to keep up with Apple’s offerings. The Galaxy Tab S6 from last year was inarguably one of the best tablet experiences team Android had on offer. But, due to the way Android works on tablets, it had its fair share of shortcomings. While Samsung has attempted to address some of these issues with its DeX Mode, my experience was quite lackluster when I reviewed the Galaxy Tab S6. This is where the new Samsung Galaxy Tab S7 and Galaxy Tab S7 Plus come in.

Samsung launched the Galaxy Tab S7 duo alongside the Galaxy Note 20 lineup earlier this year in August. And with its latest tablets, Samsung has attempted to fix most of the issues users faced on the Galaxy Tab S6. I’ve been using the Galaxy Tab S7 for about a month, and here’s my experience with Samsung’s latest flagship tablet.

Note: Samsung sent us the Galaxy Tab S7 (Wi-Fi + LTE) and the keyboard cover for this review. The company did not have any input in the contents of this review.

At first glance, the Galaxy Tab S7 doesn’t look all that different from its predecessor. But upon closer inspection, you can tell that Samsung has put some thought into refining the design this time around. With the Galaxy Tab S7, Samsung seems to have realized that most people will use the tablet in landscape mode, be it for media consumption or productivity. Therefore, the company has moved the front-facing camera to a more appropriate location, and it now rests at the top of the display when you’re using the tablet in landscape mode. An example of this new approach can also be seen on the back panel, as the Samsung and AKG logos have been adjusted in a similar fashion. The back panel now also has a slim glass section to house the S Pen which is aligned with the camera module. Since this section is easier to differentiate from the rest of the back panel by touch, placing the S Pen back to charge is a simpler process than it was on the Tab S6.

The LED flash is another handy addition, which can come in handy while scanning documents with the tablet in less than ideal lighting conditions. Lastly, the Galaxy Tab S7 features straighter edges than the Tab S6, which looks cooler but makes the tab a bit less comfortable to hold for longer durations. Looking at the two displays side-by-side, you can easily tell that the one on the Galaxy Tab S7 is brighter and offers better color reproduction. Sure, the blacks don’t look as deep and the battery life may take a minor hit, but I’d much rather pick the faster refresh rate over deeper blacks any day. The display still offers HDR10+ support, and watching HDR content on the tablet is an absolute pleasure. Much like the Tab S6, the Galaxy Tab S7 features a quad-speaker setup tuned by AKG. The tablet has two speakers on either side and they offer great stereo separation. The audio quality is top-notch, and the speakers can get fairly loud at max volume, making the Galaxy Tab S7 the perfect choice for anyone looking to buy a tablet just for media consumption.

Powered by Qualcomm’s flagship Snapdragon 865 Plus chip and 6GB of RAM, the Samsung Galaxy Tab S7 is no slouch when it comes to performance. The tablet feels snappier than my Galaxy Note 20 Ultra (Exynos variant) in day to day use, and I faced absolutely no performance issues no matter what I threw at it. As expected, the tablet performs well in synthetic benchmarks too and you can check out the screenshots below for some of the results. Multi-tasking on the tablet was also a breeze, and I faced no major issues while using it for work for a couple of days. While Android still doesn’t offer a tablet experience as polished as iPadOS, Samsung’s One UI has some cool features that go a long way in making the experience better than stock Android. Over the last year, Samsung has made some significant improvements to its software, and I didn’t experience most of the issues I faced on the Tab S6. Samsung’s DeX Mode has also improved significantly since the last time I used it. While Chrome still doesn’t open desktop versions of websites by default and prompted me to download Android apps for some Google services, Samsung’s built-in browser opened desktop versions of Google Docs, Slides, and Sheets with no issues. One thing I still missed while using DeX Mode was the ability to split browser tabs and open them in separate windows, which would require launching another instance of the app.

Although Samsung is taking steps in the right direction with DeX Mode, the Galaxy Tab S7 still doesn’t offer the same productivity experience that you can get on a similarly priced Chromebook. On top of that, the DeX Mode is pretty much useless without a keyboard, and the layout isn’t intuitive enough to use with just the touchscreen. So if you’re planning on using the tablet as a laptop replacement, you’ll have to invest in the optional keyboard cover. The keyboard itself has also received some improvements — it’s slightly bigger (thanks, in part, to the larger display on the tablet), the keys are better spaced out, the key travel is noticeably better, and the entire package feels more rigid. Using the tablet with the keyboard cover on an unstable surface still does not induce confidence, but it’s far more stable than the Tab S6 and it can get the job done in a pinch. Although I had a better experience with the keyboard this time around, the trackpad on the keyboard cover still needs some fine-tuning. While it is larger and supports multi-finger gestures, the trackpad lacks any form of accidental touch protection. This proved to be a major issue, especially due to the size constraints, and I constantly kept moving the cursor while pressing the Spacebar and Alt keys.

Since I’m not much of an artist, I can’t tell you how useful it will prove to be for professional use. But I definitely had fun coloring in PENUP, which comes preinstalled on the tablet. And while I did take some time to get used to writing with the S Pen, I had a great experience taking notes on the tablet during product briefings. As with the Galaxy Tab S6, the S Pen charges wirelessly when placed in its designated position on the back panel.

The Samsung Galaxy Tab S7 packs in a large 8,000mAh battery which was enough to keep it going through a typical workday. On the days when I exclusively used the tablet for work, it was able to deliver an SoT of about 9.5 hours with the refresh rate set to 60Hz and the brightness set to 75%. Switching to 120Hz dropped the SoT to about 7.5 hours with the same use. A typical workday for me usually consists of writing articles, some light photo editing, and checking Slack, Asana, and Gmail for updates in between. In case you do something more performance-intensive, your mileage may vary. To give you a more objective measurement of the Galaxy Tab S7’s battery life, I also ran PCMark’s Work 2.o Battery Life benchmark. The benchmark was run with the refresh rate set to Adaptive and the brightness set to 75%. And the tablet consistently managed to deliver a score of around 12 hours in multiple runs. But because of the way the benchmark calculates these results, the tablet probably won’t be able to last as long in real-world use. For example, the Samsung Galaxy Note 20 Ultra manages to deliver a score of 10 hours and 35 minutes in the same test, but my unit rarely ever delivers more than 6 hours of SoT.

As far as charging is concerned, the Galaxy Tab S7 offers support for 45W fast charging. But sadly, Samsung doesn’t ship the tablet with a 45W charger in the box. Instead, the tablet comes with a 15W charger that takes about 2.5 hours to charge the tablet from 10-100%.

Should you buy the Samsung Galaxy Tab S7? The Samsung Galaxy Tab S7 is one of the best tablets that team Android has on offer. It's the perfect choice for anyone looking for a portable media consumption device. However, Samsung still needs to work on the software to make it a great laptop replacement.

If you’re looking to purchase the Galaxy Tab S7 as a laptop replacement, then you’ll have to shell out an extra $199.99 / £189 / €199.90 / ₹13,299 for the keyboard cover. And even then, you might find working on the tablet a bit frustrating due to software limitations. Instead, you can go for a similarly priced Chromebook, like the HP Chromebook x360 14c ($499 / ₹55,999), which will offer a significantly better experience for work thanks to Chrome OS. But if you can look past these software shortcomings, the latest additions in Samsung’s Galaxy Tab lineup remain the best tablets team Android has to offer.

You can buy the Samsung Galaxy Tab S7 from Samsung.com or from Amazon in the U.S., India, the UK, Europe, and other regions. You can purchase the keyboard cover alongside the Tab S7 or independently. 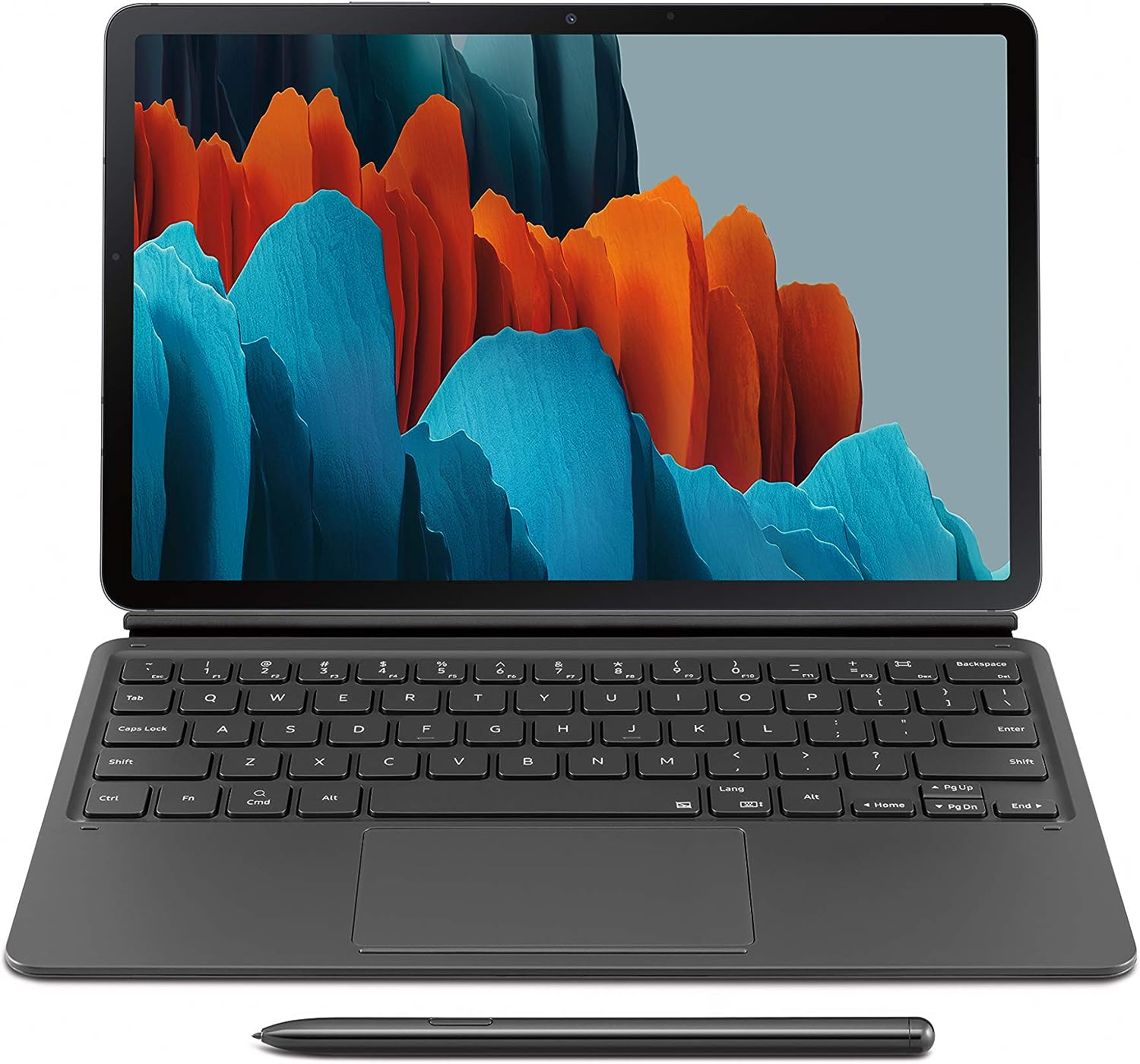