Nearly a year ago, Sony launched the Xperia 1 II, the company’s first flagship smartphone with 5G (sub-6GHz) connectivity. Alongside the Xperia 1 II, Sony also teased the Xperia PRO 5G which was said to pack support for 5G on both sub-6GHz and mmWave networks, but what was most interesting about the announcement was a mention of the phone’s micro HDMI port. With the right cable, the Xperia PRO can be turned into a professional 4K on-camera monitor. With flagship smartphone hardware and 5G connectivity, it can easily edit photos and broadcast video. One year after it was teased, the Xperia PRO 5G is finally going on sale in the U.S. through the Sony online store and B&H. In a press release, B&H highlights the features offered by the Sony Xperia PRO 5G. The features it brings to the table for mobile content creators include support for both 4G LTE and 5G sub-6GHz/mmWave, a 6.5″ 21:9 CinemaWide 4K HDR AMOLED display, a micro HDMI input port, USB-C tethering from select cameras, a trio of 12MP cameras with different focal lengths (16/24/70mm), the Qualcomm Snapdragon 865 mobile platform, an “endurance mode” to extend battery life during 5G mmWave usage, an IP65/68 water and dust resistance rating, and 512GB of internal storage that can be expanded by up to 1TB with a microSDXC card.

The base hardware is basically the same as the Xperia 1 II, but what sets the Xperia PRO apart is support for 5G mmWave connectivity and its micro HDMI input. According to AnandTech, the device features 4 mmWave antennas rather than the standard 2 or 3 found in other products. Coupled with a low dielectric constant material, Sony says its device will achieve much better, stable, and uniform reception, though keep in mind that mmWave coverage is still very limited within the U.S. Sony is offering a “specialized” Network Visualizer app that will help users test 5G signal strength so they can position their shot in the best location.

Though the utility of 5G mmWave will vary depending on location, the micro HDMI input will undoubtedly be useful for professional photographers and mobile content creators. The high-quality 6.5″ 3840 x 1644 HDR OLED display can compete with professional on-camera monitors from companies like SmallHD, and the fact that the phone can also broadcast video thanks to its flagship hardware and Android OS support means you won’t need a separate video streamer accessory. As AnandTech points out, though, the Xperia PRO lacks a few of the commonly found features in on-camera monitors such as waveforms or vectorscopes, and it also lacks camera control and status features. Hopefully, these features will be added in a future software update. We hope this is the case considering this device is priced at $2,499. That is definitely a steep price, but it may be worth it if you want an all-in-one video streamer, high-quality on-camera monitor, and flagship smartphone. 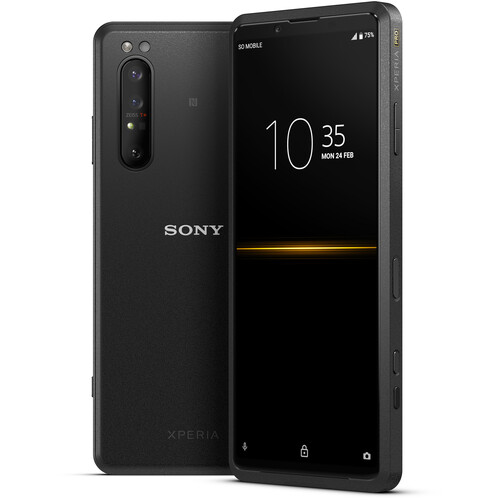 The Xperia PRO is a smartphone with 5G connectivity that also has a micro HDMI port so it can act as a monitor when connected to your camera. The price is steep at $2,499 as this is a niche product aimed at professional photographers and content creators.