TCL 20S Review: Too many compromises to recommend over the competition

TCL brought their 20 series to the US a few weeks back. Originally announced earlier this year, the series includes the TCL 20 SE, TCL 20S, and TCL 20 Pro 5G. The TCL 20s is the middle offering of the group, with an MSRP of $249.99 at launch. Considering the price is only $60 higher than the budget-minded TCL 20 SE, I wondered before receiving it exactly who the target audience was for this device.

In this short review, we’re going to explore the middle child, the TCL 20S. Of all the devices in this series, the TCL 20S feels the most out of place. The TCL 20 SE is a clear budget offering, a sub-$200 price tag and some basic features that will get you a smartphone for the least amount of money. At the top end, the TCL 20 Pro 5G is aimed squarely in the premium midrange segment of the Android market. Both of those phones make sense, but the TCL 20S seems caught in between.

That’s not to say there aren’t some nice features to mention, but they aren’t quite enough to recommend this phone over the competition at or around this price point. Here’s everything I liked and disliked about the TCL 20S.

About this review: I received the TCL 20S from TCL for review. I used this phone for 5 days as my only daily device. TCL did not have any input in any part of this review.

TCL sent me the Milky Way Gray color of the phone, though my packaging says Milky Way Black. I guess they decided the color is more gray than black, which it certainly is. The design is quite nice, with 2.5D glass on the sides and a frosted matte back. You won’t have any issues with fingerprints collecting on the rear of the phone.

On the back you’ll find the quad-camera setup, which does protrude ever so slightly. Luckily, the camera bump doesn’t cause any stability issues when the phone is resting on a desk or other flat surface. The sides of the device are all glossy, which provides a nice contrast to the matte back. The phone is easy to hold and grip and is a bit more comfortable than the TCL 20 Pro 5G, which has more dramatically curved glass edges. On the left you get the volume rocker and power button, which also houses the fingerprint sensor.

My experience with the fingerprint sensor wasn’t that great — it’s not that accurate and I’m not in love with the placement either. Over on the right, there is a dedicated assistant button and the SIM tray. The top of the device has a 3.5mm headphone jack, but that’s about it. On the bottom, you’ll find the standard USB-C port and the dual speaker arrangement. This phone does support 18W fast-charging with that USB-C port, which is an upgrade from the TCL 20 SE that doesn’t have this feature in the US. It’s worth noting there are several small differences between the US and international models, so keep that in mind when reading specs on TCL’s website. Let’s talk about the front glass and display. You’re going to get fingerprint smudges on this glass all day. A lot of them. I’m not sure if my unit was missing an oleophobic coating, or if it’s just not a very good coating. The amount of fingerprints I accumulated on the front glass was annoying to the point I noticed it constantly while using the device. I expect to get fingerprints on the front of my phone, but not to the point where I need to wipe them off every five minutes. And the situation is bad when you consider this is a new phone and not something that has already been used for 6-12 months. On the other hand, the display itself is really good. I was surprised to see how vibrant the colors are. It looks similar in that department to the OLED display on the TCL 20 Pro 5G. Brightness is passable, though it does struggle mightily in direct sunlight. I would expect that from an LCD panel at this price point, so it doesn’t bother me too much.

Viewing angles are alright, again struggling when you take the phone outside. The refresh rate is 60Hz, not surprising, but also a little disappointing, given the OnePlus Nord N200 5G has 90Hz for around the same price. If you were to judge this phone on its design and display alone, you have a pretty good package so far. The display isn’t best in class, but it’s quite nice for streaming Netflix or playing basic Android games. Build quality is solid for a plastic body and the attractive eye appeal of the phone is also important to many people.

Performance on the TCL 20S is a bit of a mixed bag. I didn’t struggle with basic apps or multitasking nearly as much as I did with the TCL 20 SE. However, I still had quite a few issues playing some of the most popular Android games. Some simpler games like Alto’s Odyssey and Pokemon Go were fine, but more intensive titles like Asphalt 8 or RAID: Shadow Legends are impossible to enjoy on the TCL 20S. You’ll notice dropped frames and lag for any high-end game, which isn’t entirely unexpected for a $249 phone.

The Snapdragon 665 is a pretty old processor, originally debuting back in 2019. I do think it’s a shame TCL didn’t spring for newer chips to put in their 2021 Android lineup. After all, they don’t release phones multiple times per year like some OEMs, so these will be their newest devices until 2022. Out of the box, you get Android 11 with TCL’s UI on top. The UI isn’t necessarily bad-looking, but there are a bunch of unnecessary apps and options that don’t make sense. Many of the TCL stock apps duplicate features already offered by Google apps most users would prefer anyway.

Some of the app icons link to mere settings pages, like the NXTVISION app that links to the settings page offering image and video enhancements on your TCL device. Some of the optional features like the fingerprint quick launch menu are poorly implemented and difficult to trigger and navigate.

TCL should definitely rethink the amount of bloat added and useless tweaks for their next Android launch. The default app drawer setting has your apps confusingly sorted into categories determined by the software, which aren’t useful at all. These are pretty much the same gripes I had with the TCL 20 SE and TCL 20 Pro 5G. The software experience from TCL leaves a whole lot to be desired. It doesn’t help that TCL guarantees only one Android update on the TCL 20S. That means you’ll likely get updated to Android 12, but may never see Android 13 on this phone.

The battery life on the TCL 20S is excellent. The Snapdragon 665 is definitely an incredibly efficient chip, even if it lacks power needs in 2021. I averaged around 9 hours screen on time on a single charge, which I would say is very good for an Android phone. Typically, I use my phone for a mixture of social media, work (Slack, Outlook, Gmail, Asana, researching stuff in Chrome), YouTube, and Spotify. Most days. I also spent around 30-45 minutes gaming on the device as well. Overall, I was very happy with the battery performance. You also get up to 18W fast charging, which is respectable but not really mind-blowing with the current state of fast charging technology. Of course, there isn’t any wireless charging at this price, so if that’s a dealbreaker you’ll need to increase your budget and look at the TCL 20 Pro 5G.

I try not to expect too much out of phone cameras in this category, but the TCL 20S isn’t terrible. It isn’t exactly great either. You can get some nice shots outdoors with the main camera and good lighting, but in general you’ll notice photos lack detail often enough to be bothersome. While the phone technically boasts of a four-camera setup, the depth sensor and macro camera are both completely useless, just like on the TCL 20 SE and TCL 20 Pro 5G. The main camera is a 64MP sensor and it’s the best of the bunch. Photos do sometimes come out oversaturated, but they at least have a little bit of fine detail with good lighting.

Indoors, the results are much less impressive, with consistently noisy photos and very low detail. You can check out some samples from the TCL 20S in the Flickr album below. 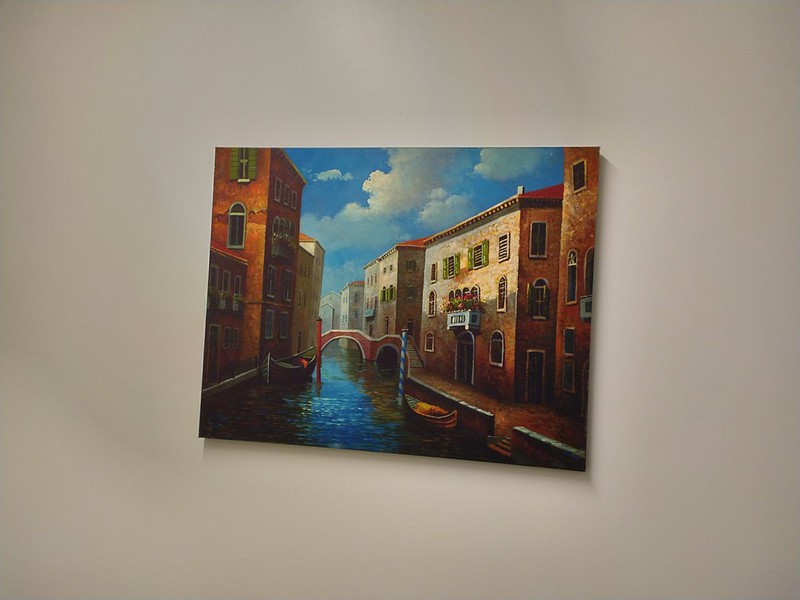 The ultrawide sensor is significantly worse than the main camera, but it’s occasionally usable. My main complaint is there’s noticeable distortion in the majority of the wide shots I attempted. The detail is also noticeably off and you don’t get very good photos at all in low-light.

The selfie camera is fine, but portrait mode struggles with edge detection. Most of the selfies I attempted with this device weren’t something I’d want to share even on social media. The main competition for TCL here is the Samsung A32 5G which has an impressive camera at around the same price. Audio on the TCL 20S is solid. The two bottom-firing speakers actually get a bit louder than the single speaker box on the TCL 20 Pro 5G. There’s noticeable distortion at high volume, but you do get a bit of bass from these speakers, something I didn’t really find much of in the other 20 series’ devices.

In the end, the TCL 20S has too many flaws to overcome a competitive field at the $250-300 price point for Android phones. On top of the issues I’ve outlined thus far, the phone also lacks an IP rating for dust and water resistance. You can find 5G in both the Samsung A32 5G and OnePlus Nord N200 5G, both of which seem like better options if you’re looking at a $300 budget.

TCL did manage to pack in a nice display and solid audio with an attractive design, but those things only go so far. You can’t play many interesting Android games due to performance issues, photo quality is subpar, and there are just too many superior devices out there to settle down and accept those compromises. The TCL 20S features a great display and attractive design but comes up short in the camera and performance department. If you only care about looks you might consider this phone, but otherwise look at options like the Samsung A32 5G.

XDA » Featured » TCL 20S Review: Too many compromises to recommend over the competition