Even with lockdowns and working from home ending in some parts of the world, many people are still pushing their home networks to their limits. Netflix streaming, Zoom calls, and online gaming can be demanding on home networks, and the best Internet connection in the world won’t help much if your Wi-Fi can’t cover every corner of your home. Thankfully, that problem has started to go away with the rise of mesh Wi-Fi systems, like the Google Nest Wi-Fi, Eero series, and Netgear Orbi.

TP-Link already has many mesh Wi-Fi systems, but the company released another one recently: the Deco X68. It’s a new higher-end option, with support for tri-band and 4×4 MU-MIMO connectivity, coming to a price of almost $300. The Deco X68 can also work with other Deco-branded networking equipment, making it a compelling upgrade option for anyone who is already in TP-Link’s hardware ecosystem.

TP-Link sells the Deco X68 in only one configuration: a $279.99 package that includes two base stations, capable of covering “up to 5,550 square feet” in total. I don’t think most people would need more coverage than the Deco two-pack since it can reasonably cover houses with 3-5 bedrooms, but it’s worth noting that you can’t just buy one more station (which you can with Google Nest Wifi and some other competitors). Increasing your network’s range would require purchasing another two-pack or adding an extender/repeater that won’t have all the features of the mesh units.

In the box, you get two Deco X68 stations, one Ethernet cable, and power adapters for each station. Each Deco unit is a cylinder, measuring 4.1 x 4.1 x 6.7 inches (105 x 105 x 169 mm) — about the same size as your average smart speaker. I would have preferred a different color than white, considering the stations work best when placed in the center of living spaces, but the Deco stations aren’t too ugly. The top lid does collect dust, though. The Deco units are each equipped with a 1.5 GHz Quad-Core CPU and two Gigabit Ethernet connectors on the back. Some mesh network systems don’t give you an Ethernet port on each node, much less two. However, you’re still limited to one port on the base station, since one of them is used for connecting to your ISP’s modem/router. If you need more wired connections, you can always get a simple network switch.

TP-Link’s setup process is similar to most other modern mesh routers. You connect one of the stations (either one works) to your ISP’s modem or router with the included Ethernet cable, plug it into a wall outlet, then download the Deco app on an iOS or Android device. The app will walk you through creating an account (if you don’t have a TP-Link account already), finding the station, and setting up your Wi-Fi network. The process took me about five minutes.

I’m not a fan of the Deco mobile app. One problem is that everything is spread across a tab bar, side menu, and various sub-pages, so finding what you’re looking for is difficult at first. All your connected devices are listed on the ‘Overview’ page, where you can set custom names/icons and view the current network traffic. The ‘More’ page has most of the system’s other settings, including options for the network itself, device blocks, firmware updates, and WPS setup.

Some of the messy organization is due to TP-Link’s focus on managing multiple Deco systems at once. The app allows you to add friends or family members as ‘managers,’ who can change settings and check devices using their TP-Link accounts. This is an excellent feature that I wish was on more routers, especially for family members that occasionally need tech assistance. Still, the mobile app’s focus on this feature becomes a disadvantage if you don’t want to use it. For example, you can’t see your connected devices on the Overview screen until you select your network from the list — even if you only have one network.

The other sore point of the Deco app is the ‘HomeShield’ tab. It’s a confusing catch-all page for various security and performance features, including device prioritization and changing the Wi-Fi broadcast channel. The page also serves as a constant advertisement for HomeShield Pro, a subscription service that enables extra features in the Deco system. HomeShield Pro costs $5.99 per month, or $54.99 if you pay yearly. I can understand having an optional subscription for functionality with running server costs (like external firewalls), but HomeShield Pro comes off as TP-Link double-dipping for basic router functionality. There are no running costs for pausing Internet on a certain device or showing detailed client information, so why does TP-Link charge a monthly fee for those features? DDoS protection is a standard feature on most routers (even non-mesh models), why is it behind a paywall here?

TP-Link allows you to change a few settings and monitor network activity through a web panel, accessible by navigating to the network gateway in your browser (192.168.1.1, in my case). I wish everything you could do in the mobile apps would also be accessible through the panel, because it is a bit silly that I still have to reach for my phone or tablet if my PC is sitting in front of me. This problem is hardly limited to the Deco X68, though — Google and Eero’s mesh Wi-Fi systems don’t have a web interface at all. Even though the Deco X68 has Wi-Fi 6, it does not support the updated Wi-Fi 6E standard. The updated standard allows Wi-Fi to use the 6GHz spectrum, dramatically reducing network congestion and giving you much faster speeds (but at the cost of reduced range). Many devices can’t connect to Wi-Fi 6E yet, so the lack of support in the Deco X68 system doesn’t matter much right now, but the missing functionality makes the X68 less future-proof.

One of the more important features in the Deco X68 is tri-band connectivity, which isn’t available in many budget mesh systems. Tri-band gives the Deco X68 a dedicated 5 GHz band for communication between stations, so network speeds aren’t reduced on the secondary units. No matter where you are in your home, you should get the fastest-available wireless connection.

I didn’t have a single problem with network performance on the Deco X86. Admittedly, my 1-bedroom apartment is easy enough to cover with even a single Wi-Fi access point, but the Deco gave me full bars no matter where I was. Wi-Fi 6 connectivity also worked for the devices I own that support the standard, like my Galaxy S21. However, my maximum wireless speeds weren’t quite as high as the advertised 1802 Mbps. I was only able to reach speeds of around 500-600 Mbps over my local network, with the benchmarking server plugged directly into the Deco base station and the other about 5 ft away on 5GHz Wi-Fi 5. That’s significantly lower than TP-Link’s promised 1802 Mbps support, but like with laptop battery tests, the advertised numbers usually come from laboratory testing that doesn’t accurately reflect the real world. I’m also not in an ideal scenario, as the 2.4 and 5 GHz bands around me are heavily congested with my neighbors’ Wi-Fi networks.

I also noticed alarming network behavior coming from the Deco system itself. I use NextDNS to monitor internet traffic on my home network, which shows the Deco X68 is sending network requests to domains owned by Avira almost every minute — NextDNS recorded over 42,000 queries in just 24 hours. Avira has a partnership with TP-Link to provide cloud security for routers, but there’s no explanation in the app that this is happening, nor is there an option to turn off the data transmissions. The Deco system has also sent thousands of requests to ifconfig.me, a website commonly used for identifying your public IP address. I have no idea why the Deco system needed to check its own IP information over 20,000 times, but unlike with the Avira pings, data to ifconfig stopped after a few days.

Update: TP-Link says the network activity is due to “the Avira cloud data base [distinguishing] whether [the network request is] secure data or malware.” A firmware update is in the works that will turn this functionality off if no Avira network features are enabled in the app, but there is no estimated timeline for that yet.

I’ve been a fan of TP-Link’s smart home products for years (I’ve bought several Kasa smart outlets and security cameras myself), and the company has a long history with networking equipment. The Deco X68 functions as advertised, providing fast mesh Wi-Fi that covers my whole home, but it’s still almost impossible for me to recommend. I’m not a fan of the Deco app, with its unorganized menus and constant advertising for TP-Link’s HomeShield Pro subscription. The subscription itself also includes many features that are standard on other routers (Eero and Google Wifi can pause Internet on specific devices, for example). Finally, it’s alarming how much data about my network activity that the Deco X68 is sending to a third-party company by default, with seemingly no way to turn it off.

If TP-Link addresses the excessive data transmission (and perhaps improve the app’s interface), the Deco X68 would be easy to recommend. It’s one of the cheapest tri-band mesh network systems currently available, and it has a few features not common in some competing devices, like the (limited) web panel and two Ethernet ports on each node. Until then, you’re better off with an Eero 6, Google Wifi, or just about any other Wi-Fi system. 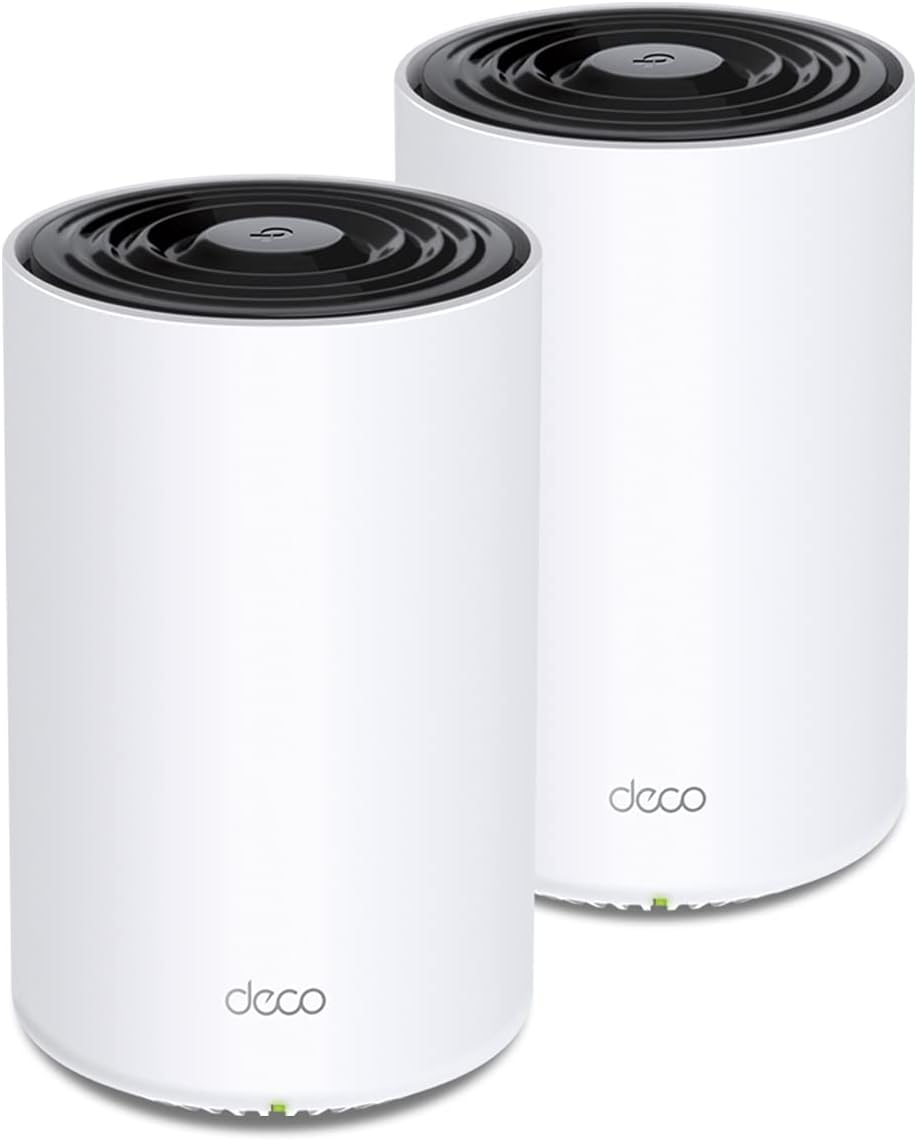 TP-Link's new AX3600 (Deco X68) Tri-Band WiFi 6 mesh router lives up to its range promise, but I wasn't able to see the advertised speeds and want TP-Link to address the unexplained data transmissions and software issues with the Deco app