Smartphone cameras have come a long way in the past few years. We’ve seen multiple lenses, large sensors, hundreds of megapixels, and whatnot. Every brand aims to have a top-tier camera system on its smartphones. Apart from using newer, bigger sensors and better processing, several brands have tried to bring innovative technologies to improve the camera performance on their devices. Periscope cameras, for example, allowed smartphones to achieve a larger zoom range than a traditional telephoto lens. Samsung used a variable aperture camera on a few of its phones to improve low light performance. Similarly, Vivo stood out with a gimbal camera system on the Vivo X50 Pro last year. For those of you who are unaware, a gimbal is a device that stabilizes a camera by countering its movements across all three axes. Gimbals are generally used to mount cameras or phones while recording videos in order to minimize shakes or disturbance. Vivo found a way to integrate a gimbal within the camera system itself to reduce jerks and hand movements while clicking a picture or shooting a video. As a result, the Vivo X50 Pro was one of the best camera phones out there, especially in terms of stabilization. The Vivo X60 Pro+ launched earlier this year only improved on the sophisticated camera hardware and produced even better results. Just about 6 months after the X60 series was launched, Vivo is back with their next iteration — the X70 series — with the same core philosophy of providing the best camera experience on a smartphone. It’s not just about the cameras though. The Vivo X70 Pro+ that we’ve been using offers a premium, flagship experience across all departments. While we work on our review of the device and pit it against some other top-end phones its segments, here are our initial impressions of the device and what we think of it so far, especially in the camera department.

About this article: Vivo India sent us a unit of the Vivo X70 Pro+ for review. The device was used for a period of one week before we penned down our first impressions. The brand did not have any inputs into the content of this article. If cameras are high on your priority list, the Vivo X70 Pro+ has got you covered in every single aspect. And no, that’s not an exaggeration. The primary camera on the X70 Pro+ is a 50MP sensor that takes some beautiful shots with a great amount of detail in good lighting conditions. The natural depth of field that’s seen due to the large sensor and a wide aperture gives the pictures a professional look. The shallow depth of field can haunt you at times when clicking close-up objects, which is why the camera switches automatically to the ultra-wide lens when you go too close to the subject. This is quite annoying though since the quality of images shot using the ultra-wide camera aren’t as good as the ones shot using the primary sensor. Thankfully, you can turn this auto-switching off and stick to the primary camera. Coming back to that 50MP GN1 sensor, the dynamic range looks great with all the elements in the image having the right amount of highlights and shadows. We did not experience a scenario where the image wasn’t well exposed. If you like your pictures to have natural colors, you’ll have to do some editing to turn down the contrast and saturation levels from the images captured by the Vivo X70 Pro+. Vivo’s image processing has always leaned towards eye-catchy colors that look slightly unnatural but are surely pleasing to the average eye. At times, this does lead to colors being represented wrongly. Vivo should ideally give users an option to choose between natural and boosted colors since an accurate representation of a scene is also something a lot of people seek. Take a look at the image samples below. The drink appears to have a slight pinkish hue whereas the actual color was more reddish. Similarly, if you look at the image of the “B6” flag denoting the table number at the restaurant, the blue tones are boosted to look darker and deeper than what the actual scene looked like. In the same image, the color of the sky also appears to be slightly bluer than what it was in reality. These are slight quirks that Vivo needs to address by being less aggressive with the saturation slider. 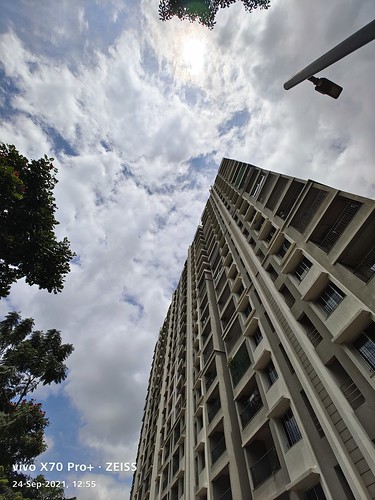 Portrait shots from the primary camera also look brilliant in most scenarios. The edge detection looks spot on and the background blur does not seem unnatural. In some situations, especially with direct sunlight falling on the subject, we observed a slight halo effect around the image. Portrait mode images from the front-facing camera also look good but it seems like the phone applies some beautification and softening even when the option is disabled. Then comes the two zoom cameras — a 2X telephoto lens and a 5X periscope camera that can zoom digitally up to 60X. The 2X zoom lens is useful for portrait shots and close-up objects and does a good job in well-lit situations. The 5X periscope camera also does a fairly good job in broad daylight but struggles in low-light conditions. The 60X zoom isn’t the best out there both in terms of how far you can zoom in and the quality of the shots. The Galaxy S21 Ultra can zoom farther and also produce better zoom shots via the periscope lens.

We’ll have more to say about the different camera features on the Vivo X70 Pro+ as we continue to extensively test and compare it with other flagship phones. The first impressions though are excellent and we can confidently say that this is one of the most versatile sets of cameras that you can find on a smartphone. No matter what the situation is, you’re not going to be disappointed by the pictures clicked with the Vivo X70 Pro+. Vivo has put a lot of thought into other departments as well apart from the cameras. The Vivo X70 Pro+ feels like a solid slab of metal and glass when held in the hand. The back has a textured feel that’s soft and easy to grip. The edges are curved and so are the sides of the display which melt and meet at the frame. Almost the entire top half of the back is occupied by the camera module which extends to the right to include the Zeiss optics branding. The phone is slightly on the larger side and you will need two hands to use it. The large size can be attributed to the 6.78 inch AMOLED display that looks gorgeous. It has a hole-punch cutout at the top and the bezels look nearly symmetric all along. The colors on the display pop out and look pleasing to the eye. When consuming HDR content, the display can achieve a max brightness of up to 1500 nits which is one of the highest on any smartphone. Even under normal circumstances, we had no issues using the phone outdoors under direct sunlight. The 120Hz refresh rate ensures a smooth experience. Vivo has not compromised even in terms of design and the display panel used on the X70 Pro+. It’s as good as you would find on any other flagship device. It’s also IP68 water-resistant this time around which is surely an added bonus. The Snapdragon 888+ handles CPU duties on the Vivo X70 Pro+ and needless to say, the performance is top-notch. You get Vivo’s Funtouch OS which is better than what it used to be before but still needs some work. On the Indian unit, we found some pre-installed bloatware that you wouldn’t really expect from a device that costs as much as the X70 Pro+. That’s not really a Pro experience. We also faced the issue at times where the fingerprint icon on the lockscreen wouldn’t show up and we had to swipe up manually to unlock the device. We’ll make sure to include more about the software experience on the Vivo X70 Pro+ in our full review as we need to spend some more time with it. A 4500mAh battery is what runs the show on the Vivo X70 Pro+, which given the huge display and large resolution sounded quite low initially, but we’re happy to report that the battery life has been pretty good so far. We have been averaging a day’s worth of usage in the initial few days with the battery dipping to about 15% at around 10 PM. The 55W FlashCharge charger included in the box does come in handy here as it can juice up the phone sufficiently with a quick 15-minute charge. The addition of 50W wireless charging this year makes the Vivo X70 Pro+ a complete flagship in all departments. Generally, phones like these skimp out on an IP rating and wireless charging but Vivo has both those areas covered.

Vivo X70 Pro+: The best camera on a smartphone this year? Vivo has certainly done a great job especially in the camera department of this phone. The Vivo X70 Pro+ clicks crisp images in almost all lighting conditions and is also a good phone to record videos since it has a gimbal for stabilization. The overall package is also quite good considering it has a beautiful display, a solid design, a top-of-the-line processor, and all the perks that you would expect from a flagship smartphone in 2021 like a high refresh rate display, fast charging, UFS 3.1 storage, stereo speakers, etc. The Vivo X70 Pro+ has been launched in India for a price of ₹79,990 which means it competes against top-tier flagships from OnePlus, Xiaomi, and even Apple if you’re willing to consider an iOS device. The OnePlus 9 Pro and the Mi 11 Ultra are slightly cheaper with the latter offering similar camera hardware. The Samsung Galaxy Z Flip 3 is also available at a  similar price and while it isn’t as feature-packed as the X70 Pro+, it can fold in half which will appeal to a lot of people. The Vivo X70 Pro+ is a flagship phone with versatile camera capabilities. It's packed with features and if cameras on a phone are important to you, this phone can be a solid option.

We’ll have more to say about the Vivo X70 Pro+ in our review of the device where we’ll give you a verdict on whether or not you should buy the phone. However, if we go solely by our initial impressions of the phone, Vivo has made a solid device that can give other flagship phones a good run for their money. It just remains to be seen how good of a run it is.