Vivo Z1Pro Hands-on: Triple Cameras and a Big Battery on a Budget

Vivo currently ranks third in the Indian smartphone industry and this can be attributed to its success as an offline brand. Lately, Vivo has ramped up efforts to increase online sales and has launched smartphones in India with the intention of striking a balance between innovation and affordability. The Vivo Z1Pro is the latest smartphone that the company has to offer and this time around, it is focusing its attention on Gen Z. As a result, the Z1Pro is loaded with compelling features such as triple rear cameras, a hole-punch display, zesty colors on the shiny back, and a reliably large battery.

With the Z1Pro, Vivo is squaring off with other companies that offer compelling specifications at sub-₹15,000 (~$220) prices. The device’s primary competitors include the Redmi Note 7 Pro as well as the Realme 3 Pro. With additional quirks such as the extra camera, a longer-lasting battery, and a (presumably) more future-ready hole-punch design, Vivo appears to have checked the right boxes which appeal to the average consumer, at least on paper. To learn if the same holds true in reality, you’ll have to read through our the first impressions of the smartphone.

The Vivo Z1Pro is dressed to party. The colors on its reflective back pop out while the pattern shifts shape. The back panel under the transparent sheet of lamination is plain and has no visible lines, giving the smartphone a smooth and slick appearance. It comes in three color variants – Sonic Black, Sonic Blue, and Mirror Black – and the one I got my hands-on was a Sonic Blue model. Keeping media consumption in mind, Vivo has leveraged a really large 6.53-inch display on the smartphone and this makes the phone wider than most contemporary ones. Holding the smartphone may be a discomfort for users with small hands. Besides its breadth, the weight of the smartphone is also something which can easily peeve users. That is primarily because of the 5,000mAh battery, which makes the Z1Pro weigh slightly over 200 grams.

While it’s a good thing to have a loaded smartphone, the heft is not something that all users will enjoy. If you’re looking forward to buying the Z1Pro, be ready to bear with this slight discomfort in favor of the long-lasting battery. You might eventually be able to get used to the weight of the smartphone, but I haven’t used it long enough to form a convincing opinion about it. Thankfully, despite the weight and breadth of the smartphone, the buttons are easily accessible and tactile. Both the volume rocker and the power buttons are located on the right side of the smartphone, while the left side houses a button for Google Assistant and the SIM tray. A microUSB port is present at the bottom alongside the headphone jack, the primary – and apparently, only – microphone, and a grille hiding a mono speaker underneath. Although Xiaomi has taken a stride towards adopting USB-C on the latest Redmi Note 7 Pro, other competitors are still sticking to microUSB in the favor of incumbency. The screen, as I mentioned before, appears vast but it also looks modern because of the hole punch. The Vivo Z1Pro is now the most affordable smartphone with this display and this is going to be an attractive prospect for buyers, especially since the upgrade cycle in this segment is usually two to three years long. Being an LCD panel, the display has a decent color output with saturated colors and deep blacks but with cool whites. Once again, the vastness of the display makes it tricky to be used with a single hand. On the upside, the display can be really useful for those who like to consume video content on a large screen. The bezels surrounding this display are notably large, but the curving around the edges makes them less obtrusive. With the hole punch camera, the smartphone achieves a screen-to-body ratio of almost 91%. The chamfering of the plastic frame that binds the display makes the smartphone easier to hold, in spite of its breadth.

Overall, the design of the Vivo Z1Pro can be seen as a mixed bag. There are pleasing elements to the design like the reflective gradient texture, the hole-punch display, triple rear cameras, and the Google Assistant button, but there are also peeving ones such as the weight and breadth of the smartphone.

The triple cameras on the back of the Vivo Z1Pro play a significant role in its marketing as the perfect smartphone for the price. The setup includes a 16MP primary sensor paired with an f/1.78 aperture lens, an 8MP wide-angle camera with f/2.2 aperture, and a 2MP depth sensor with an f/2.4 aperture lens. Although the Z1Pro is not the most affordable triple camera smartphone in the market, the prospect of three cameras is still exotic for the price segment. Meanwhile, selfies have been vital to Vivo’s brand identity since the beginning and to justify this, the smartphone features a 32MP selfie camera inside the hole punch cavity.

From my limited experience with the smartphone, I believe it should fulfill the expectations of most users if not exceed them. Broadly, the images have workable details as far as you’re using these images for social media. However, the colors are not very saturated and you tend to see noise in the images while zooming in. 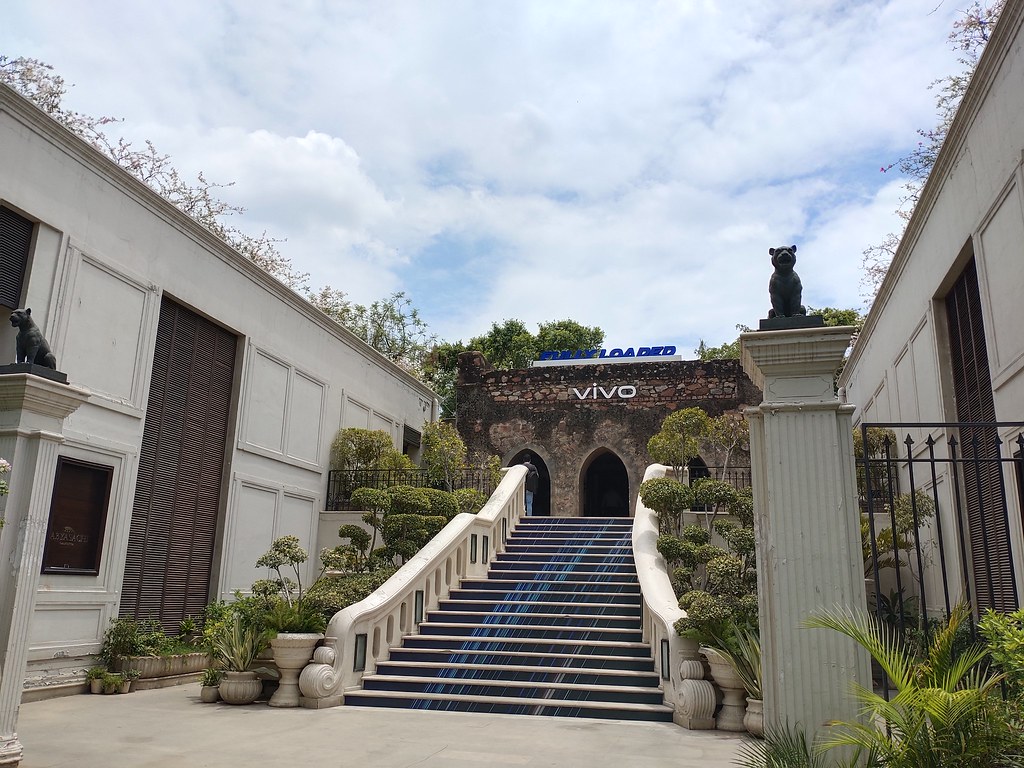 Selfies appear to have ample details, but there is an evident smoothing over faces even with the beauty mode switched off completely. In fact, there’s a dedicated mode in the Camera app called AI beauty which is meant to soften your skin tone, thin your face, or flatten the contours of your face. I’m not a fan of these enhancements, but you might be.

The Camera app also features a host of different lighting effects to highlight portrait selfies even more. I wish that the camera app UI was a bit cleaner and the various modes segregated into categories. But, that’s my preference and users who like to keep all options out in the open for easy access should like this interface.

All in all, the camera performance of the Z1Pro is acceptable. With some editing of the images, you should be able to prepare likable images for social media.

The Vivo Z1Pro sports a heavily skinned version of Android Pie with the company’s custom overlay called FuntouchOS 9. If you’ve ever used a Vivo smartphone in the past, you should be familiar with the influence that Apple iOS has had on FuntouchOS. If you haven’t, let me tell you that “only a little” is not the answer. FuntouchOS lacks an app drawer (which is not the most unwelcoming part). The quick settings panel is accessed by swiping upwards from the bottom whereas the notification tray expands by dragging from the top. The last Vivo smartphone I spent some time with was the Vivo V15 Pro, and the quick settings panel on that smartphone drew out only to occupy half of the display (something like pre-iOS 10 builds). Even though the Z1 Pro comes with the same version of FuntouchOS as on the V15 Pro, the quick settings menu in case of the latest smartphone occupies the entire screen when drawn out from the bottom.

The resemblance to iOS 11’s redesigned Control Center is uncanny. Furthermore, the upper half of this overlay menu is meant for customizable shortcuts for your favorite app actions. In fact, the shortcut menu appears to be heavily inspired by the Shortcuts app that Apple introduced in iOS 12. That’s not necessarily a bad thing, per se, and it could be to make current or previous iOS users at home. However, if you’re accustomed to Android’s traditional design, your experience with the interface might not be as replete with fun as Vivo touts it to be. The interface can be modified to quite an extent with custom launchers, but we can’t guarantee a delightful experience.

Vivo proclaims that the Z1Pro with a Qualcomm Snapdragon 712 can offer a vivid and immersive gaming experience. To complement the processing power of the SoC, the smartphone gets Vivo’s Ultra Gaming Mode which offers “4D” vibrations and a 3D surround sound experience, which can actually assist you with better spatial awareness, especially while playing online shooting games. Vivo offers three variants of the Z1Pro – 4GB/64GB, 6GB/64GB, and 6GB/128GB. I haven’t actually gamed on the smartphone to tell you how its performance actually fares, but the Snapdragon 712 should, in theory, outperform the Snapdragon 710 on the Realme 3 Pro and the Snapdragon 675 on the Redmi Note 7 Pro.

Meanwhile, the 5,000mAh battery on the Z1Pro gets the complementary 18W fast charging support. That is one feature that is utterly needed to refill the massive battery in a decent amount of time. I haven’t, however, actually tested it out, so I can’t actually vouch for it. Vivo has been cautious of the criticism Xiaomi has earned for providing a standard charger in the box, so they’ve actually included an 18W fast charger in the package.

Vivo Z1Pro has its pros and cons, but for the most part, it feels like a good balance of practically viable features. FuntouchOS is the only thing that I find unbearable about the smartphone, but a large number of Indian users – typically non-tech-savvy offline buyers – actually fancy the layout, so I’m not suggesting you ignore the smartphone just for this one reason. I’m actually inclined to see how the Z1 Pro performs in the market since this time, the company is taking a different route. Vivo will be selling the Z1 Pro only online and not through its robust offline channels. This is both a challenge and an opportunity for the company, and we’ll have to see how it plays out for them. If you’re in the market for triple-camera smartphones with a budget of ₹15,000 (~$220), you can also check out our first impressions of the Honor 20i.