The Xiaomi 11T series just launched earlier this week, and they’re the first Xiaomi smartphones to be released globally without “Mi” branding. The Xiaomi 11T Pro is the mid-cycle successor to the Xiaomi Mi 11 Pro, and as such, it is more of an iterative improvement than a generational one. The Xiaomi 11T Pro drops the in-display fingerprint scanner and the curved display from the Mi 11 Pro, but it adds one substantial upgrade not seen in other mainstream flagships. The 11T Pro supports ultra-fast charging with the 120W charger that comes in the box, which charges the battery from 0-100% in under 20 minutes.

For context, the charging speeds of most other flagship phones top out at around 60W-65W, with Samsung and Apple devices charging at much lower rates between 15W-25W. Of course, ultra-fast charging isn’t the Xiaomi 11T Pro’s only feature, though it’s what sets it apart from the competition. Although the global chip shortage made it difficult for companies to hit the same price points as last year, Xiaomi still manages to undercut a lot of the competition with its 11T series, while retaining flagship specs in the Qualcomm Snapdragon 888 and up to 12GB of LPDDR5 RAM. But how does the Xiaomi 11T Pro fare in day-to-day use? About this review: I received the Xiaomi 11T Pro (8GB + 256GB) from Xiaomi USA on the 25th of August, 2021. The company did not have any input into the contents of this review.

Display: Flat edges for the win! The Xiaomi 11T Pro’s display is a flat, 6.67-inch AMOLED panel with a 120Hz refresh rate and a centered hole-punch cutout at the top. It gets pretty bright at a peak brightness of 1,000 nits and supports HDR10+ content. If you’re a fan of flat displays, then the 11T Pro is a great option. It’s clean-looking, edge-to-edge, and drops the rounded sides of the Mi 11 and the Mi 11 Ultra.

On the plastic back is a singular camera module at the top left, which packs the triple camera array, as well as Xiaomi’s brand logo at the bottom. The Xiaomi 11T Pro feels good in the hand, although it collects fingerprints easily. On the righthand side is the power button which doubles as a fingerprint sensor. The volume rocker is above that too.

Overall, the Xiaomi 11T Pro is comfortable to hold, and the only letdown in its design is the fingerprint scanner. It’s not the easiest for a left-handed person to use, and I find myself consistently brushing off of it when my phone’s screen is off. When that happens, it counts as a failed attempt to unlock the phone, and I need to later put in my phone’s password to unlock it because of the repeated failed attempts. Curved displays are also a matter of personal preference, and while I prefer how they look, I find flat displays easier to use.

The Xiaomi 11T Pro features a 108MP main camera, just like the regular Mi 11 and Mi 11 Ultra. In fact, the camera arrangement is more or less identical to the Xiaomi Mi 11X Pro that launched earlier in the year, with the same primary, ultra wide-angle, and macro cameras. While the picture-taking capabilities of the Xiaomi 11T Pro aren’t as good as the Mi 11 Ultra, the phone is a more-than-capable shooter that has been able to capture some fantastic photos. 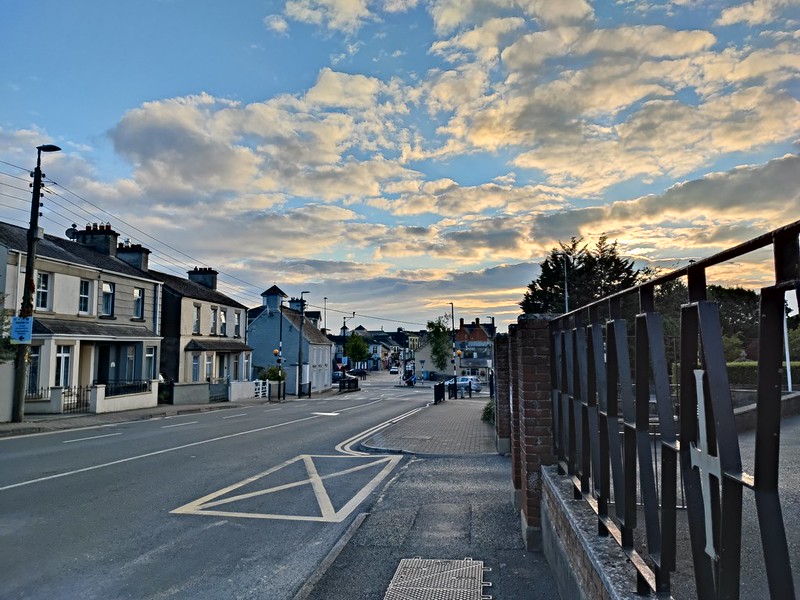 Based on the outcome of the above photos, I trusted the Xiaomi 11T Pro to be my main photography device on a recent trip to Newgrange, a prehistoric passage tomb built sometime around 3200 BC. Some of the photos I took while I was there are in the above album, and the photos certainly didn’t disappoint. I’ve been really impressed by the 11T Pro’s rear cameras, although I can’t say the same for the selfie camera, which is just average.

The Xiaomi 11T Pro comes with a 120W charging adapter in the box, the fastest smartphone charger on the market today. Smartphone brand Infinix showed off a 160W charger in a concept phone recently, but it’s not available for purchase. Therefore, Xiaomi holds the fast-charging crown with both the 11T Pro and the Mi 10 Ultra from last year, which also supports 120W charging.

Oddly, no other Xiaomi smartphone — apart from the aforementioned Mi 10 Ultra — charges at anywhere close to those speeds. The Mi 11 Ultra has “just” 67W charging, a pretty big downgrade in contrast (but only when comparing, because 67W charging is also pretty quick). The company, to my knowledge, has never publicly stated why that’s the case with the Ultra, but I’m hoping this feature carries over to its future smartphones.

My reasoning, of course, is just that 120W charging on the Xiaomi 11T Pro is crazy fast. How fast? You can check out the chart below to see just how fast it really is. I plugged in the phone at 6:55 PM in the evening, and within 20 minutes, it had reached 100%. A small disclaimer though — when the battery indicator in Android first shows 100%, the battery is not actually at 100% capacity as Andrei Frumusanu of Anandtech notes. Instead, it reaches full 100% capacity around the 25-minute mark, when the current actually goes down to 0. This is true for most other phones and is not unique to Xiaomi, but it’s worth nothing nonetheless. Xiaomi says the 11T Pro can get to 72% battery in just ten minutes of charging from 1%, and I was able to reproduce a result close to that, reaching 71% in 10 minutes. The phone understandably gets warm while using the 120W charger, although it didn’t feel any warmer than when I was fast-charging other phones.

As with any fast-charging technology, there’s always a concern about long-term battery degradation. Xiaomi says the 11T Pro maintains 80% of its battery capacity after 800 charging cycles. Of course, since I haven’t used the phone long enough to charge it that many times, I can’t comment on how accurate Xiaomi’s claim is.

As for the phone’s battery life, I’ve been pretty impressed by the Xiaomi 11T Pro. The phone has two 2500mAh cells, for a combined 5000mAh. Here are screenshots showing several days of my phone use:

During my time with the phone, the Xiaomi 11T Pro lasted between 4 to 7 hours of screen-on use. I use my phone fairly heavily, with a mixture of Twitter, Facebook Messenger, web browsing, and music listening. I’m usually on mobile data as well, which definitely doesn’t help the battery life. The 11T Pro doesn’t have the best battery life in a smartphone, that’s for sure, but combined with 120W charging, it’s more than ample for my use case.

It’s hard to overstate how useful the 120W fast charging has been for me. I stayed with some friends when I went to Newgrange where I took some of the above photos, and I forgot to charge my phone the night before we were supposed to leave. I woke up, plugged my phone in to charge, went for a shower, came back, and it was at 80% or so in just a few minutes. A ten-minute charge is good for several hours of active usage, which was more than enough to get me home.

The Xiaomi 11T Pro is not much different from both the Mi 11 and the Mi 11 Ultra on the merits of performance, audio, and software. It packs the same Qualcomm Snapdragon 888 as in both of those devices, and by virtue of the fact that it’s the latest flagship chipset, it can run basically everything that you throw at it. I certainly didn’t notice any oddities in my usage, and from emulation to games, it didn’t struggle whatsoever.

Read more: The Xiaomi Mi 11 is an excellent bang-for-buck option, and here’s why

When it comes to audio, again, you’re getting basically the same dual-speaker setup as the Mi 11 and the Mi 11 Ultra. They’re tuned by Harmon Kardon, and as I said of the Mi 11, I have been genuinely impressed. They’re loud and don’t really distort, and there is bass present in the audio, though it’s not extremely powerful. To put it simply: they’re really good speakers for a smartphone, but they’re still smartphone speakers. The top speaker is a good bit quieter than the bottom-firing speaker, a typical imbalance that we usually see in smartphones. The top-firing speaker also technically has two outputs – the four holes at the top do output some sound, but there is an actual earpiece wedged between the metal and the display as well, where the majority of sound comes out of. For phone calls, it’s loud, and the person on the other end has no difficulty in hearing me.

Finally, on the software front, MIUI is as good as ever. It’s certainly a controversial Android variant, but I love it, especially after the company fixed a number of touch issues that it had on the Xiaomi Mi 11 Ultra. I have no complaints here, but be sure to check out our Mi 11 and Mi 11 Ultra reviews where we go more in-depth about MIUI if you’re worried about it.

Conclusion: Is it better to wait?

The Xiaomi 11T Pro is in an interesting spot, no less because there’s not a whole lot of difference between it and the Mi 11i, which can be purchased at the same price. The 11T Pro definitely has a leg up over the Mi 11i thanks to its superior charging, but the rest of the device is very similar. The 11T Pro gets a larger battery too, but it also trades the glass back for a plastic back, meaning it attracts fingerprints and feels tad less premium in the hand.

The Xiaomi 11T Pro is the latest and greatest flagship from Xiaomi, and it packs incredibly fast 120W charging.

Overall, I’m a huge fan of the Xiaomi 11T Pro, but I can understand that some may have reservations about its charging speed. The Xiaomi Mi 11i is also a more premium-looking and feeling device that, if you care about the looks of your smartphone, might be worth looking into instead. Personally, I wonder if Xiaomi’s 120W charging will stick around this time in its flagships, considering it arrived with the Mi 10 Ultra last year and failed to make a reappearance until now.